The Ford Mondeo should be cheap to maintain and run

While the Volkswagen Passat is available with an all-diesel line-up, the Mondeo is now only offered as a hybrid and a diesel. However Ford’s decision to simplify its engine range means that the Mondeo has lost both the 1.0-litre and 1.5-litre Ecoboost petrol engines, and the 1.5-litre EcoBlue diesel engine.

Those that cover more than 12,000 miles each year should consider the 148bhp 2.0-litre EcoBlue diesel, which is available with a manual or automatic gearbox. With the manual, this model is the most efficient Mondeo, with claimed fuel economy of up to 56.5mpg and CO2 emissions of 116g/km. 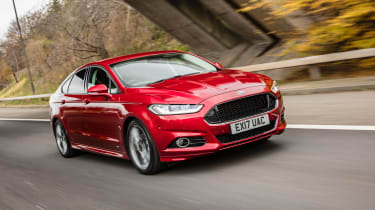 The Ford Mondeo Hybrid (reviewed separately) represents an alternative to diesel, particularly to company-car drivers. As it’s a hybrid, it uses a 2.0-litre TiVCT petrol engine mated to an electric motor and is capable of up to 50.4mpg, which we were able to get close to with an average of 46mpg in our test. Its CO2 emissions of 94g/km (103g/km for the estate) are the lowest in the range and qualify for low Benefit-in-Kind (BiK) ratings. It doesn’t qualify for the London Congestion Charge exemption, unlike some rivals that have sub-75g/km CO2 emissions.

On the whole, the Mondeo's fuel economy is competitive with rivals' – especially with a manual gearbox fitted. All Mondeos cost £145 a year to tax after the first year's CO2-weighted payment (except for hybrid models, which cost £135 a year), but it's possible to tip over the £40,000 threshold if you tick every box on a high-end Vignale estate, in which case you'd pay a surcharge of £320 in years two to six.

The Ford Mondeo insurance ratings range from group 17 for the entry-level diesel model to 29 for the automatic-gearbox 2.0-litre EcoBoost Vignale.

Ford has one of the biggest dealer networks in the country, so keeping your Mondeo maintained should be simple. Pay upfront for a Ford Premium Protect Plan and Ford will carry out two services over two years for £400, or three services over three years for £600, with roadside assistance throughout Europe also included.