To offer more passenger and boot space, the Ford Mondeo hatchback has grown by 87mm so that even tall adults have plenty of space in the back seats – although headroom might be tight for the middle passenger. Space shouldn't be at a premium in the front seats, either, and if you go for the top-of-the-range Titanium X Pack model, you also get a 10-way adjustable heated electric driver's seat.

An optional panoramic sunroof really does make the car feel a lot bigger inside, giving it an upmarket, executive feel. Getting into the Mondeo is easy thanks to wide-opening doors but the letterbox-style rear screen of the hatchback does limit visibility. 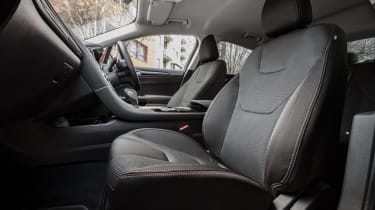 Ford has long been a master of making its cars easy to live with every day, and if you spend a lot of time in your car, you'll be happy to hear the Mondeo offers plenty of storage spaces. There's a pair of cup-holders in the central console between the two front seats, as well as a useful tray behind the gearstick. Storage is helped by the fact that the Mondeo's infotainment system cuts down on the amount of buttons and controls needed. 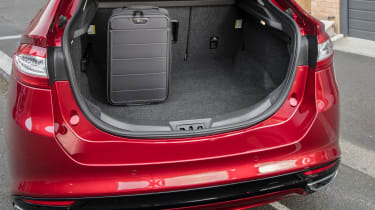 That extra length also means the new car gets a bigger boot than its predecessor – up from 528 litres to 550 litres. That's smaller than the 586 litres offered by the new Volkswagen Passat. Maximum capacity in the Mondeo hatchback is 1,466 litres. One big advantage the Mondeo has over the Mazda6 and Volkswagen Passat saloons is its large hatchback boot opening, which makes loading big items easy.

Like the Passat, the Mondeo is also available as an estate for even more room. It takes 525 litres of luggage to fill the boot to the roof, while maximum capacity (with the rear seats down) sits at 1,630 litres. Buyers can choose between carrying a full-size spare wheel for ultimate peace of mind, or a puncture repair kit, which frees up a few more litres of carrying capacity. The bad news for Mondeo hybrid buyers is that boot space in both the hatchback and estate models is compromised by the cars’ batteries.