Pick-up trucks like the Ford Ranger are generally built as tough workhorses. This means that instead of the tactile, attractive materials you’ll find in an SUV, the emphasis is on longevity – a builder isn’t too worried about how pretty his dashboard is, as long as it doesn’t fall apart.

That said, the Ford Ranger’s interior is nicer than most, although it can get noisy at motorway speeds as the upright body shape generates a lot of wind noise. It’s an easy car to drive, despite the imposing length of its 5,362mm body in all but the Regular Cab versions, while the light steering makes placing the Ranger in city streets easier than you expect. The 10-speed automatic gearbox makes amends for its costliness by being perfectly suited to the engine, It’s unobtrusive and smooth to use, while making short work of towing.

The Ranger's interior doesn’t feel quite as upmarket as the class-leading interior finish of the Volkswagen Amarok and Mercedes X-Class, but is noticeably nicer than those of most rivals. There are more cheap, shiny plastics than you’ll find in an SUV, but they should stand up to wear and tear, which is more likely given the Ranger’s intended use. 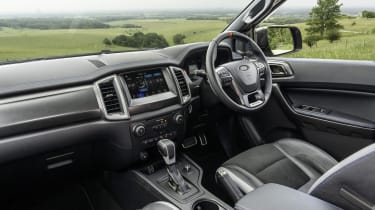 You’ll find the same style of buttons and switches used in Ford’s passenger-car range, which feel well made and are easy to use. The Ranger also has a digital instrument display, which allows you to see a variety of different information.

All Ford Ranger models are equipped with a suite of grip and stability-enhancing electronic systems, as well as hill-start assist to prevent the vehicle rolling back when you’re pulling away, hill-descent control to limit downhill speeds off-road and trailer sway control that can restore control of a trailer that’s started to weave while being towed.

The rather utilitarian Ford Ranger XL has a short list of standard equipment compared to passenger cars, but Ford’s clever EasyFuel system (which prevents you filling up with petrol by mistake), tinted glass, electric door mirrors, a heated windscreen, Bluetooth connectivity, DAB digital radio and a height-adjustable driver’s seat are the highlights. 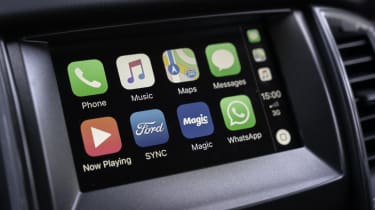 The Limited model is fairly luxurious, loaded with kit such as dual-zone air-conditioning, rear parking sensors and power-operated leather seats. It also has Ford’s SYNC 3 infotainment system with an eight-inch colour screen, which can support Apple CarPlay and Android Auto. The Limited is distinguished outside by privacy glass and chrome rear bumpers. The distinctive top-of-the-range Wildtrak model adds roof rails, 18-inch alloy wheels, a rear parking camera and sat nav.

The aggressive Raptor gets Performance Blue paint usually reserved for ST models and black exterior trim to give it an even tougher appearance. Inside, there’s black full-leather upholstery, plus numerous sporty additions including heavily bolstered front seats and a chunkier steering wheel with magnesium gearshift paddles, plus bespoke dials ahead of the driver. Underlining its non-commercial status is the addition of a lockable cover for the load area.

The Ford Ranger options list is primarily made up of practical items, such as various different types of tonneau cover for the load bed, tow bar and the off-road pack, which offers a locking rear differential for greater traction and extra underbody protection Models without standard air-con or sat nav can add these individually.