“The Honda Civic saloon shares many of the hatchback's talents, but there’s little reason to spend extra for it unless you love its looks” 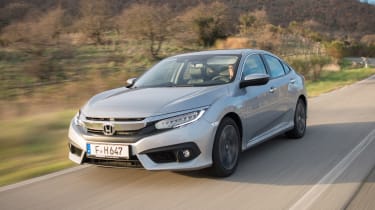 Family saloons might be about as fashionable as tank tops right now, but Honda is still selling plenty of Civics as well as HR-V and CR-V SUVs. To bolster the range, Honda is offering customers a four-door alternative to the standard hatchback. If you find the edgy and polarising rear design of the five-door Civic a bit too attention-grabbing, the saloon could be the answer, because its flowing roofline, elongated rear window and neat boot are far more conventional in appearance.

You’ll need to appreciate the aesthetics, too, because extra practicality probably isn’t a reason to go for the saloon. Its boot volume is slightly increased from 478 to 519 litres, but the lack of a hatchback makes it slightly less convenient when loading awkward items. Away from the boot, there’s loads of space for front and rear passengers, plus visibility is and the rear seats split and fold, too.

Honda is only offering two engines in the saloon for the time being: a 1.0-litre petrol and 1.6-litre diesel, both of which are modern and efficient. The petrol is our pick, thanks to its refinement, impressive 127bhp power output and very reasonable 58.9mpg fuel economy. Long-distance drivers may still prefer the diesel and its 83.1mpg fuel economy, but the automatic version is probably best avoided, as it slashes the diesel's economy to 68.9mpg.

Just like in the hatchback, a combination of quick steering, a slick manual gearbox and taut (but not crashy) suspension makes the Civic one of our favourite cars to drive in the class. It’s not quite on a par with the excellent Ford Focus, but should give keen drivers a bit more to enjoy than the buttoned-down Skoda Octavia. 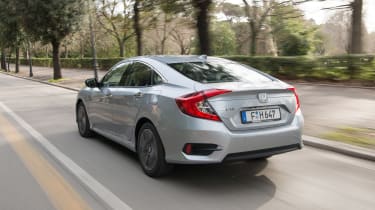 Trim levels are simple too, with SE, SR and EX all getting the same Honda Sensing active safety kit for a five-star Euro NCAP crash-test score. All Civics get air-conditioning, automatic lights and Bluetooth, while the SR adds Honda Connect with Apple CarPlay and Android Auto compatibility. EX brings luxuries like leather upholstery, LED headlights and keyless entry.

The Civic hatchback impressed in its Driver Power owner satisfaction survey debut, coming ninth out of 75 models, just ahead of the Skoda Octavia and Volkswagen Golf.

Costing £500 more than the standard Civic and around £2,000 more than a Skoda Octavia, the Civic saloon is likely to remain a fairly niche proposition – especially as its load-lugging advantage isn’t all that big. But that’s not to say the Civic saloon is a bad car; we rate the standard Civic very highly and the saloon has most of the same strengths. If you prefer its looks and don’t need the more powerful 1.5-litre petrol, it could be the Civic to go for.

Choosing an engine in the Civic saloon is as simple as picking petrol or diesel, for now at least. We’d recommend the small 1.0-litre petrol to drivers with a low-to-medium annual mileage, especially when lots of stop-start trips around town are likely.

The turbocharged three-cylinder is efficient, returning up to 58.9mpg with a manual gearbox, or 60.1mpg if a CVT automatic gearbox is chosen. CO2 emissions of 107-110g/km mean a reasonable 22-23% Benefit-in-Kind (BiK) rate for company-car drivers. 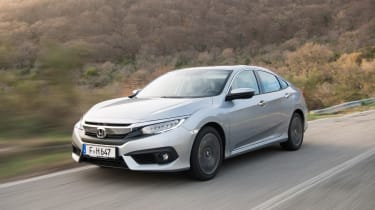 If you drive more than 12,000 miles a year, it could be worth going for the diesel, which costs around £1,400 more to buy in the same trim. Stick with the standard manual gearbox and fuel-efficiency is impressive, sitting at 83.1mpg. You’ll probably want to avoid the automatic, however, because it cuts this figure to 68.9mpg – a surprisingly large drop. Emissions of 91g/km in the manual bring 23% BiK, while the automatic increases this to 26%.

The petrol should be slightly cheaper to insure, too, adding to its appeal. The 1.0-litre sits in group 15 regardless of trim level or gearbox, while the diesels are found in groups 18-19.

Servicing at Honda workshops should be reasonable and customers responding to our 2018 Driver Power satisfaction survey praised Honda dealerships for their fair prices.

Despite their small size, both engines feel punchy enough to satisfy most drivers

The Honda Civic hatchback is one of our favourite family cars to drive, with responsive steering and a satisfying manual gearshift. The saloon doesn’t get the adaptive suspension of top-spec versions of the hatchback, but in other respects it feels just as good. The suspension verges on being overly firm – especially when larger alloy wheels are fitted – but doesn’t transmit too many shocks to passengers. 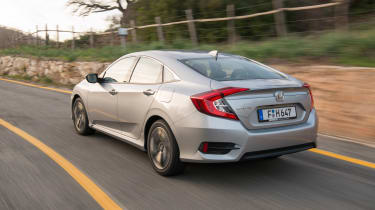 Although it's small, the 1.0-litre petrol is advanced thanks to Honda’s VTEC and turbocharging technology, pushing power up to 127bhp. This is quite a bit more than the 108bhp in the most powerful 1.0-litre TSI Volkswagen Golf, while the Ford Focus is offered with a 123bhp 1.0-litre EcoBoost engine. Acceleration from 0-62mph takes 10.7 seconds, while top speed is 130mph.

The diesel is the same 1.6-litre i-DTEC found in the Civic hatchback, with 118bhp, but more pulling power than the petrol. It takes 9.9 seconds to get from 0-62mph with a manual gearbox and tops out at 125mph. It feels plenty quick enough as you pull away, but it’s slightly less polished if you push it harder. There also isn’t the urge found in some rivals, especially when loaded with four passengers and their luggage. It comes into its element on the motorway, though, where and poor refinement around town ebbs away. You can choose a nine-speed automatic with the diesel engine but, while it's smooth and responsive, it blunts acceleration slightly and is not as enjoyable to use as the manual.

The latest Honda Civic isn't as quirky inside as its predecessor, but it feels classier and better built

Passengers in the front of the Civic saloon will find it identical to the hatchback, with a more conventional dashboard layout than its predecessor, but nicer materials and better build quality. Moving the fuel tank has also allowed Honda to improve the driving position, with the seat able to drop significantly lower down than before. 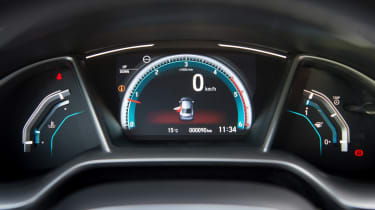 There are SE, SR and EX trim levels, and even the entry-level SE gets the Honda Sensing suite of safety features, climate control, automatic lights, Bluetooth, 16-inch alloy wheels and a five-inch display for the DAB stereo with eight speakers.

The saloon has a huge boot and lots of room for passengers, but the hatchback can provide more convenient access

The main difference between the Civic saloon and hatchback is the boot, with a hatchback swapped for an elongated bootlid here. It's a bit 'swings and roundabouts' practicality-wise, because while the saloon’s boot is slightly larger, accessing the space isn’t quite as easy.

Honda has given the saloon a usefully wide boot opening, but it’s not as tall as the hatchback's, and the fact the boot is separated from the main passenger compartment means bulky items are harder to fit inside. 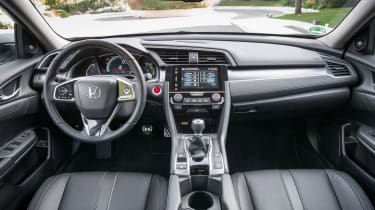 If you tend to just carry bags and suitcases, the 519-litre boot (up from 478 in the hatchback) could bring a small advantage, but it’s not as handy for loading kids bikes, furniture or other taller items.

The driving position offers lots of adjustment and there’s plenty of room for tall adults to sit in tandem. Like the hatchback, the saloon has 60:40 split-and-fold rear seats, with ISOFIX child-seat mounting points in the outer two spots.

It hasn’t been on sale long, but the Honda Civic made an impressive debut in our 2018 Driver Power owner satisfaction survey, and with near-identical parts, the saloon should be just the same. It came ninth out of the top 75 cars on sale in the UK, with 9.3% of owners reporting a fault in the first year. Of these, electrical gremlins were the most common issue.

A five-star Euro NCAP crash-test rating will also be a major selling point. Honda has taken the admirable decision to fit Honda Sensing safety equipment across the range, instead of only including it as a pricey option or with top trims. So, even the SE gets autonomous emergency braking, forward collision warning, lane-keeping assistance, lane-departure warning, adaptive cruise control and traffic-sign recognition. It can also help prevent the Civic from leaving the road if you should begin to wander towards the verge.

The Honda Civic saloon costs more than some key rivals

Prices for the Civic saloon start from just over £19,000 for an SE petrol and rise to around £27,000 for a diesel EX with an automatic gearbox, which is around £500 more than the equivalent hatchback. This also makes it around £2,000 pricier than a Skoda Octavia and slightly more expensive than a 1.0-litre Volkswagen Golf. In other words, you won’t be buying the Civic saloon to save money – you’ll need to fall for its charms instead.