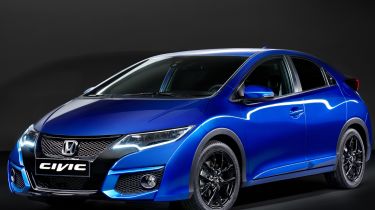 The Honda Civic Sport is a mid-level trim within the hatchback's range and, as the name suggests, is probably the sportiest model available other than the Type R hot hatch.

The most notable of differences with the Sport is the black alloy wheels and aggressive bodykit, both of which can't be found elsewhere in the trim range. The Sport model also has all-round electric windows, metal alloy pedals, tinted windows and a boot spoiler. Bigger brakes are also thrown in, along with a front armrest and Honda's clever Magic Seats, which can be folded flat or upwards like cinema seats, depending on what you need.

Two engines populate the Civic Sport's list - a 1.8-litre i-VTEC petrol and a 1.6-litre i-DTEC diesel. The 140bhp petrol sprints from 0-62mph in 9.1 seconds, but is a considerable amount less economical over the diesel, managing up to 46.3mpg. The 118bhp diesel may be slower to accelerate to 62mph, hitting that speed in 10.5 seconds, but is far better on fuel; the clamied combined figure of 76.3mpg is incredibly strong. It's only beaten by efficiency-focused models like the Volkswagen Golf BlueMotion, with its economy figure of 88.3mpg. Engines found in the more comparable Ford Focus Titanium and Volkswagen Golf GT come nowhere near the Civic's diesel engine fuel economy.

The impressive economy figure from the diesel engine means fuel stops should be spread further apart than you might think. Its enough to completely trounce any engine fitted to the Ford Focus Titanium and the Volkswagen Golf GT.The sharp new design, thanks to a 2015 facelift to bring it into line with the Civic Type R, appeals over the more conservative styling of the Volkswagen Golf or Ford Focus.The Civic Sport is equipped with Honda's clever Magic Seats. They add a whole extra level of practicality on top of the big boot and make the Civic one of the most versatile hatchbacks on the market.

More of a general point applied to all Civic models, the spoiler that cuts through the centre of the rear window severely harms rear visibility.Although practical and full of clever storage solutions, the Civic just isn't as spacious in the rear as a Golf, for example. The wide C-pillars (the supports between the rear lights and the roof) and the Civic also starts to feel a little claustrophobic in the back.

The 1.6-litre D-TEC diesel is the much better option, simply because of that desirable fuel economy figure of more than 75mpg.