"The Honda Civic has an alternative and stylish design and a great reputation for reliability, making it a worthy rival to the Ford Focus and Volkswagen Golf."

Over four decades ago, the Honda Civic was one of the first Japanese cars to make a mark in the UK and it has since become synonymous with affordable and reliable family motoring. Now in its ninth iteration and now built in Swindon, Wiltshire, it’s still a solid and affordable choice.

The Civic does, however, face far more competition today, with popular models like the Ford Focus, Vauxhall Astra and Volkswagen Golf all offering impressive looks, quality and technology. Many contest the Civic for value, too, with models including the practical Skoda Octavia, refined Hyundai i30, stylish SEAT Leon and Kia Cee’d with its seven-year warranty all offering low running costs.

Still, the striking looks of the Civic and its impressive engines mean it’s hardly backing down from the fight. Our favourite version is the 1.6-litre diesel, which is refined and capable of 78.5mpg, with no road tax thanks to its low CO2 emissions. It should also find favour with business customers, thanks to its 18% Benefit-in-Kind (BiK) tax rating. 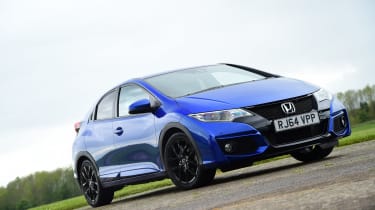 You can also choose one of two petrol engines, a 1.4-litre with 99bhp or a 1.8-litre with 140bhp. These are more expensive to run, with worse fuel economy and higher emissions than the diesel. To make matters worse, while the 1.8-litre appears quicker on paper, it doesn’t feel it on the road.

The driving experience in the Civic isn’t quite as engaging as the Ford Focus or Volkswagen Golf, largely because the steering feels slightly remote. The Civic’s suspension is also fairly soft, but it always feels safe, with plenty of grip in reserve.

Previously, the Civic’s pricing tended to look quite high compared to its main rivals, even coming in above the Golf, but recent price reductions have made the Honda better value. Delve into the specs and the Civic also impresses, coming with standard DAB radio, Bluetooth and alloy wheels. You’re only likely to need to upgrade if you need navigation. 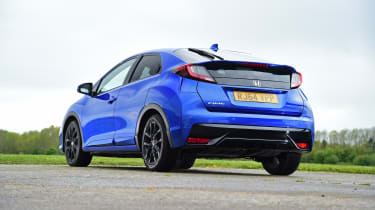 With a more aggressive body, privacy glass and gloss-black alloy wheels, the Civic Sport is a youthful addition to the line-up, offering some of the road presence of the Type-R hot hatchback without its considerably higher running costs.

The Civic has always been a safe car and the newest model is no exception, with a five-star score in independent Euro NCAP crash-testing. Along with the features we now all expect, like airbags and anti-lock brakes, the Civic also has standard autonomous emergency braking, which can automatically slam on the brakes if a collision is deemed imminent.

In our 2016 Driver Power customer satisfaction survey, the Civic came a respectable 40th out of 150 models and managed an impressive seventh position for reliability. UK motorists also found the Civic well built, affordable to run and practical.

With a great reliability and safety record, economical engines and unique looks, the Civic is certainly worth a look, even if it can seem fairly expensive.