Aside from the high-performance Honda Civic Type R there are only three engines to choose from in the Civic range. That looks a little thin compared to the Volkswagen Golf's 13-engine line-up, which includes the petrol-electric GTE hybrid, the quick GTD diesel and the range-topping Golf R. On the plus side, the Honda's diesel engine is bang up-to-date, but its petrol engines are beginning to lag behind the competition.

While the Honda Civic doesn't have a wide range of engines, most people will be happy with the 1.6-litre diesel. It's our favourite, thanks to its excellent fuel economy of 78.5mpg and CO2 emissions of less than 99g/km, which mean free road tax. 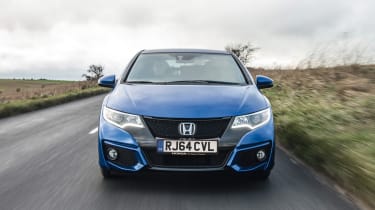 The 1.8-litre petrol Civic is starting to look dated next to the latest offerings from Honda's rivals. It can return 45.6mpg, compared to the 54.3mpg that the (admittedly less powerful) 1.4-litre petrol Golf can manage. Road tax for the Golf is also more affordable: VW owners will save £100 every year.

The 1.4-litre Civic is a lot slower than the 1.8-litre model, but only slightly more efficient, returning 52.3mpg. CO2 emissions of 129g/km mean that road tax is still comparatively pricey at £110 a year. A Ford Focus 1.0-litre EcoBoost petrol offers the same performance, even better economy and costs just £20 a year to tax.

Buyers can choose a five-speed automatic gearbox, but this reduces fuel economy and increases CO2 emissions, making the Civic more expensive to run. It’s only available with the 1.8-litre petrol engine and does without the stop-start fuel-saving technology fitted to the manual car.

The basic 1.4-litre Civic sits in insurance group five, but the 1.8-litre engine leaps into group 15. Most expensive to insure of all is the 1.6-litre diesel, which occupies group 17. These ratings are comparable to VW Golfs of a similar specification.