Interior quality in the Honda Civic is better than most rivals, but it still falls short of the VW Golf

Honda pitches the Civic above mainstream rivals such as the Ford Focus and Vauxhall Astra and it feels better built inside than both of those models. The Civic's dashboard is also more distinctive than the conservative design found in the Volkswagen Golf, although the VW ultimately wins out for quality.

All models come with a height-adjustable driver's seat and a steering wheel that can be adjusted for reach and rake. The car's rear spoiler affects visibility, but go for the SE Plus model or above gets you front and rear parking sensors, plus a camera at the back to aid parking.

The old Honda Civic suffered from an uncomfortable ride. This has been resolved by giving the new car fluid-filled suspension that gets close to matching the comfort of the Volkswagen Golf. The Civic's aerodynamic shape means the Honda can cut through the air with minimal wind noise inside. 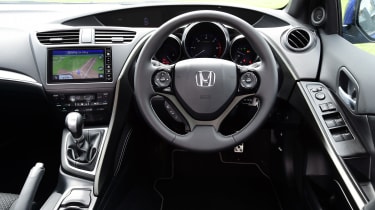 Honda has made the new Civic's dashboard simpler to use than in the old model, although the futuristic looks are retained. Interior quality has improved thanks to soft touch plastics on the dashboard and doors, although some areas still let it down when compared to the Volkswagen Golf. Like an increasing number of new cars these days, the Civic incorporates the Android MirrorLink system, which duplicates your smartphone's screen and apps on the car's screen.

Specifying Sport trim adds an aggressive bodykit and rear spoiler, as well as exclusive black alloy wheels and tinted electric windows – although do note that there are no performance upgrades; Sport trim is all about style, rather than speed, shown by the fact that this trim level is actually now the entry-level trim when fitted with the 1.4-litre petrol engine - it's the cheapest Civic you can get. 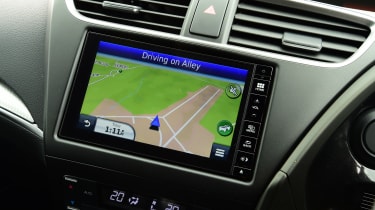 SE Plus Navi trim adds Garmin navigation to the Honda Connect infotainment system, along with auto lights and wipers and front and rear parking sensors. SR trim equips the Civic with a leather interior, heated front seats and a panoramic glass sunroof.

Honda offers a range of optional styling features, including a fancier fuel filler cap (£100), side skirts (£465) and a rear diffuser (£375) that can make your Civic look much sportier than a basic model. However, £535 for rear parking sensors seems quite expensive. We think it's well worth adding sat nav, though.