The current Honda Civic has fluid-filled rear suspension that makes it a lot more comfortable than the old model and almost as comfortable as a Volkswagen Golf. The car's electric power steering system is smooth, but it doesn't have much feel at higher speeds. Although the Honda doesn't lean a lot in corners, the Ford Focus' steering inspires much more confidence and makes that car more fun to drive. 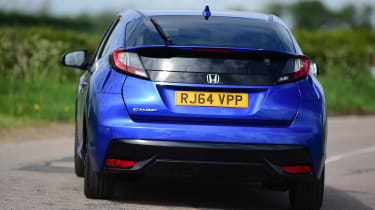 The Honda Civic engine range includes a 99bhp 1.4-litre petrol, a 1.8-litre petrol and a 1.6-litre diesel. All models come with a six-speed manual gearbox, but the 1.8-litre petrol can also be specified with five-speed automatic transmission.

The 1.6-litre diesel is our pick of the engine range, thanks to its blend of performance and fuel economy. Despite being capable of more than 78mpg, it can get from 0-62mph in 10.5 seconds, but it feels faster than that. A top speed of 129mph makes it a relaxed cruiser at 70mph on the motorway. Our only gripe is that this engine has a tendency to stall at low revs if you're not careful.

With 0-62mph taking 9.1 seconds, the 1.8-litre petrol is slightly quicker than the diesel, but you're unlikely to notice much of a difference in the real world and it's more expensive to run. The 1.4-litre petrol is cheaper to run than the 1.8-litre, but 0-62mph takes 13.4 seconds, so overtaking on A-roads requires a degree of planning not needed with the other two engines.

Although the sportily-styled Civic Sport doesn't have any more power than the standard Civic, it definitely looks the part. Those after genuine performance should seek out the fast and aggressively styled Honda Civic Type R. This produces 302bhp thanks to its turbocharged 2.0-litre engine. It’s a seriously swift hot hatchback that’ll go from 0-62mph in just 5.7 seconds – and we’ve reviewed it separately.