Improved steering but the automatic gearbox is best avoided

The Hyundai i10 is now lower and wider, and not only does this make it practical but the i10 feels more like a supermini than a city car to drive too. There's no feeling of instability as you corner at higher speeds, and thanks to its light weight, the i10 can be good fun.

Engineers have worked on its steering, making it slightly more responsive and also beefing up its feel, improving on the overly light sensation in the old i10. Fear not, though; it's still easy enough to twirl at parking speeds to make manoeuvring easy.

The i10 in N Line form is more fun than the standard car and becomes one of the only sporty city cars to rival the Volkswagen up! GTI. It can't quite match the GTI's pace or steering feel, but Hyundai's engineers have done a good job of stiffening and tuning the i10's suspension. While you can tell it's taut, it still feels compliant and refined, giving the N Line surprising composure for a car of its size. 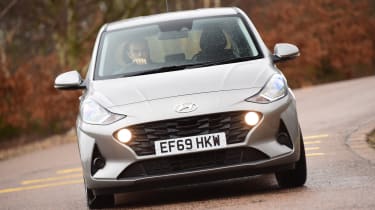 Hyundai's 1.0 and 1.2-litre petrol engines have been carried over from the previous model and, unlike most rivals, there's no turbocharging unless you buy the range-topping N Line. With 66bhp the smaller engine is adequate around town and well suited to learner drivers, with a smooth five-speed manual gearbox, but it lacks power out of town. For just £500 more, the 83bhp 1.2-litre is a worthwhile step up, giving the i10 a more capable feel, especially if you plan on hitting the motorway. 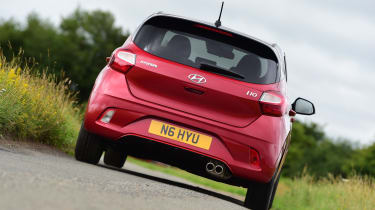 Both engines are available with an automatic transmission but it’s best avoided as its shifts feel nervous and hesitant. It also makes the car significantly slower, increasing the 0-62mph sprint for the 1.0-litre from 14.6 to 17.3 seconds and from 12.6 seconds to 15.8 for the bigger engine. 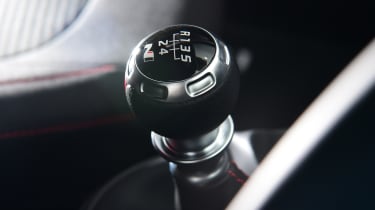 The N Line is fitted with a 1.0-litre turbo petrol engine, giving it 100bhp and almost twice the pulling power of the standard 1.0-litre. Its 0-62mph time is cut to 10.5 seconds, which still might not sound especially quick, but doesn't really paint the full picture. The N Line feels much more willing and enjoyable at lower speeds, with performance starting to tail off as you go faster. As well as being fun, the N Line also feels more grown up, as you can overtake slower vehicles more readily and keep up with motorway traffic more easily. It's a shame the manual gearbox only has five gears though - the up! GTI has a six-speed transmission.