Hyundai has a good reputation in both areas

Hyundai is known for making reliable cars, and even if owners do run into any trouble, it also offers a competitive warranty. Hyundai will be hoping its new i10 performs better than its four-star predecessor in crash tests, and given the standard safety kit fitted, that could certainly prove a reality. 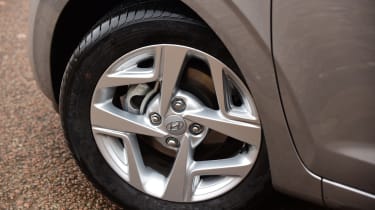 Hyundai describes the i10 as a 'brand new car from the ground up', so it'll be some time before reliability can be properly judged as customers rack up miles in the real world. However, the i10's engines are largely the same as those used before, and we've little reason to expect any issues.

In our 2020 Driver Power owner satisfaction survey, the latest Hyundai i10 didn’t feature due to only going on sale early in the year. The Hyundai brand managed a reasonable 13th place out of 30 manufacturers overall though, with only 8.9% of customers reporting one or more faults with their cars in the first year - one of the lowest overall scores in our survey.

Even the entry-level 1.0-litre SE comes with an impressive host of safety features, from lane keep assist to autonomous emergency braking and driver attention alerts. It even includes 'eCall’, which automatically alerts the emergency services in the event of an accident.

The latest i10 hasn't been crash-tested yet, but its impressive level of active safety equipment looks set to improve on its predecessor’s four-star score, so long as there are no surprises in other areas.