Despite being a relatively new model, the Kona has won praise from its owners in our Driver Power surveys for its reliability, cheap running costs and array of safety features. This is backed up by its very strong results in independent crash safety testing, which will inspire buyer confidence too.

Hyundai was well regarded in our 2020 Driver Power Survey, finishing in an excellent 13th position out of 30 in the manufacturer rankings. A total of 8.9% of owners reported a fault within the first year of ownership, representing a significant drop of around 4% from 2019.

Overall, owners rated the Kona as a reliable car, with the model finishing in 60th place out of 75 cars in our survey, with only 4.5% of owners reporting a fault in the first year. Servicing costs were deemed to be reasonable by owners, who also praised build quality and the standard five-year/unlimited mileage warranty. 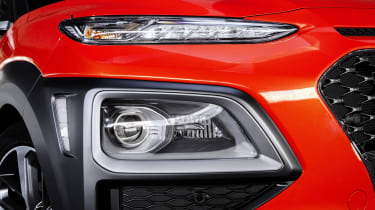 The Hyundai Kona emerged from Euro NCAP's rigorous crash-test regime with a creditable five-star safety rating. Its adult occupant protection score of 87% narrowly beat its rating for child occupant protection, where it scored a solid 85%.

While these statistics mainly reflect the strength and design of the Kona's structure, it was rated highly for its standard safety equipment, too. This includes driver fatigue monitoring, lane-keeping assistance, hill-hold and hill-descent control. The Premium SE model gets blind-spot monitoring and rear cross-traffic alert, while the Premium GT has autonomous emergency braking.