Interior practicality is a Hyundai Santa Fe strong point, but some rivals can carry more luggage 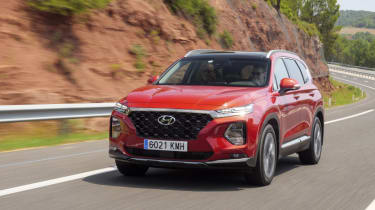 There's little doubt that the Hyundai Santa Fe is one of the bigger family SUVs, and it has the measure of most rivals when it comes to interior space and practicality. Unlike some, seven seats are standard across the range. 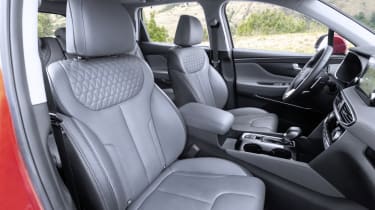 Compared to the previous model, the latest Santa Fe has 65mm more distance between the front and rear axles, which brings with it an increase in the length of the passenger compartment. You won't particularly notice this in the front seats, where there's plenty of space for the driver and passenger, but rear-seat occupants get generous headroom provided for each of the three second-row seats. There's a completely flat floor, making it more comfortable for feet and it's easily wide enough for three passengers to avoid banging shoulders.

There are also separate air-conditioning controls for those in the back, as well as 12V power supplies in the rear centre consoles. A handy void beneath the front seats gives those in the back somewhere to put their feet, too.

The two third-row seats aren't bad, either, and an adult of average height will be comfortable enough for a reasonable journey. They are still best suited to small children, however. 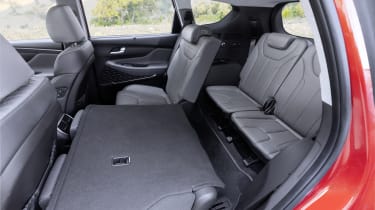 That third row can be split 50:50 for load or passenger space, and the boot comes in at 625 litres with both seats stowed. Folding them down is easy thanks to simple buttons and tags to press and pull. Drop all five rear seats and the luggage capacity grows to a huge 1,625 litres, and there are numerous hooks and a luggage net to keep loads secure.

Overall boot space is virtually identical to that of the Kia Sorento, but actually a little less generous than the Volkswagen Tiguan Allspace. No figure is given for load space when all seven seats are in play, though, and luggage capacity suffers somewhat at the expense of maximum passenger-carrying capacity. The electronic tailgate is a helpfully square shape.

Any Santa Fe with a manual gearbox can tow a braked trailer or caravan of up to 2,500kg, and automatic models can pull 2,000kg. Unbraked trailer weight is limited to 750kg across the range.