The range-topping Hyundai Tucson diesel engine is smooth and powerful

The Hyundai Tucson offers a choice of two petrol and three diesel variants. Its steering is a little vague and rather lifeless when cruising, but it's still one of the best crossovers to drive. The Drive Mode Select system helps to add a bit of weight, particularly in Sport mode. 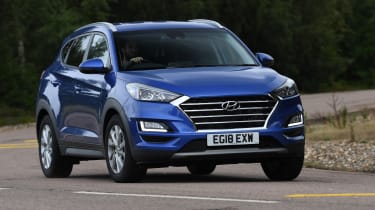 The suspension is well damped and the Tucson rides well over most bumps, even when the large 19-inch turbine-style alloy wheels have been fitted.

Both petrol engines are 1.6 litres in size. The non-turbo version has significantly less torque than the diesels, so you have to really extend it to make decent progress. In the process it becomes just as intrusive and loud as the diesels. As there’s no advantage in fuel economy terms, we’d recommend the diesels unless you cover a very low annual mileage. The 1.6-litre 'T-GDi' turbocharged petrol engine is better, though.

The two 1.6-litre diesels and the 2.0-litre on offer will likely be the best choice for most drivers. The mid-range 1.6-litre may prove to be the best seller, with a reasonable 11.2-second 0-62mph time with a manual gearbox. The other 1.6-litre diesel offers less power – 113bhp – and takes slightly longer to do 0-62mph, with a time of 11.5 seconds.

The 2.0-litre diesel is equipped with four-wheel drive, which will be beneficial if you’re looking to tow a horsebox or caravan, or live in a rural area.

The 182bhp diesel is strong and very capable. It’s very smooth and acceleration only gives rise to a hushed hum, partly because of the mild hybrid system supplying up to 16bhp under acceleration – there’s very little of the typical diesel clatter to be heard. Despite this, many buyers will probably go for one of the 1.6-litre diesels with two-wheel drive because of their superior economy.