The Hyundai Tucson is pretty economical, so long as you avoid the turbo petrol

The Hyundai Tucson doesn’t lead the pack in terms of fuel efficiency, but it does pretty well. The most economical version is capable of over 50mpg, but that’s not enough to beat the Nissan Qashqai class leaders for outright fuel economy.

Every diesel engine in the Tucson range features 48V mild-hybrid assistance, with the entry-level 113bhp 1.6-litre the most efficient on offer. Claimed fuel economy stands at up to 54.3mpg and CO2 emissions of 135g/km mean it’s the top choice for company-car drivers, with an affordable Benefit-in-Kind (BiK) rating.

The 134bhp version of the 1.6-litre diesel engine claims 52.3mpg and 141g/km in CO2 emissions, also resulting in an affordable BiK tax banding. The most powerful diesel engine is a turbocharged 2.0-litre producing 182bhp. It’s equipped with four-wheel drive and an eight-speed automatic gearbox, and is capable of up to 42.8mpg with CO2 emissions of 172g/km. 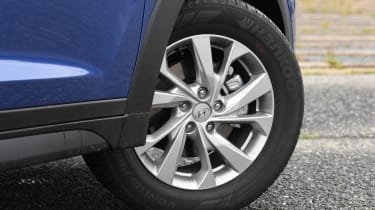 Every model in the Tucson model range costs £150 a year to tax.

The Tucson's insurance grouping ranges from 12 to 25 depending on the exact engine and trim level chosen, so cover shouldn't be too expensive. It’s worth noting that unlike most other cars, some higher trim levels can have lower insurance groups because of their better safety kit.

Hyundai offers an impressive five-year/unlimited-mileage warranty on the Tucson beating the cover of almost all its rivals, including the Nissan Qashqai and Skoda Karoq. That's not enough to trump the Kia Sportage, which covers drivers for two more years, however the Kia policy is limited to 100,000 miles.

Hyundai offers fixed-price ‘Hyundai Sense’ servicing plans on all its models, which means you pay a single amount upfront to cover scheduled maintenance. These cost £500 (£400 for petrol) for two years and £700 (petrol £500) for three years of maintenance. Unlike some manufacturers, it can even last for five years, at a cost of £1200 (£1000 for petrol), so you’ll know exactly how much you need to budget for the cost of servicing.