Plenty of power and grip, but inert steering and too much noise spoils the Kia Soul

For such a tall car, the Kia Soul corners without too much body lean and has plenty of grip. The steering has three settings, each slightly heavier than the one before. Sadly, no matter which setting you choose, it lacks the positive feedback that you get in a SEAT Arona.

The Soul used to have a rough ride, but the suspension fitted to the updated version is better suited to poor-quality British roads. That’s unless you go for the Soul Sport, because stiffer suspension means it has a firm ride both around town and on the motorway, not helped by 18-inch alloy wheels. 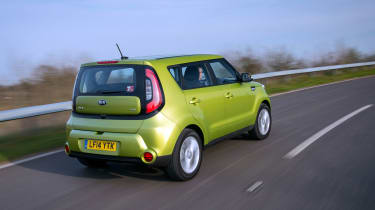 The 134bhp CRDi diesel remains our pick of the engine range, making overtaking easy, but on the downside it's quite loud when you accelerate. It gets the car from 0-62mph in 10.8 seconds with a manual gearbox, while a seven-speed automatic reduces this time by a tenth of a second

As part of a raft of updates for the Kia Soul in 2016, a 1.6-litre 201bhp T-GDI petrol engine was introduced, turning the Soul into a rather unlikely sports car. Its impressive power output is enough to see the Soul from 0-62mph blast in 7.5 seconds.

This engine drives through a seven-speed dual-clutch automatic gearbox (an option on other models) and its extra power is kept in check by front brakes that are bigger and more powerful than those on the rest of the range.

The 130bhp 1.6-litre GDi petrol also appears powerful on paper, but in reality it needs to be worked hard to deliver its best performance, and it's also quite noisy. The 0-62mph time here is ever so slightly faster than the diesel, at 10.6 seconds.