Plenty of head and legroom in the Kia Soul, plus lots of storage cubbies

The 2016 updates included more than just a visual makeover – the new Kia Soul is now longer, wider and taller than before, so there’s more space for people inside. You sit quite high and the Soul has large front and side windows, giving excellent visibility. There's also a reversing camera fitted to every version except the entry-level '1' model.

The increase in dimensions and the Soul’s boxy shape help to create a spacious interior, with more front and rear headroom than you'll find in the curvier Nissan Juke. There's plenty of legroom for four adults to travel comfortably, while three children can fit easily on the rear seats. 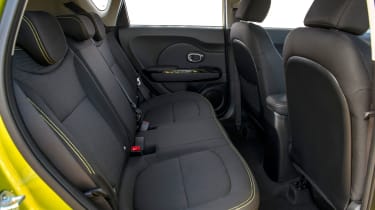 Interior storage impresses, with door pockets able to swallow large bottles, cup-holders behind the gearlever, a large glovebox and space for your phone and wallet in the centre console.

The boot measures 354 litres behind the rear seats, making it almost identical in size to the Juke and 2008, but slightly smaller than the Captur's boot, with up to 450 litres luggage space.

The rear seats split and fold, but don't go down completely flat, so there's a step over which you have to lift longer items. With the seats down, there's an impressive 1,367 litres of space if you load the car right up to the roof. 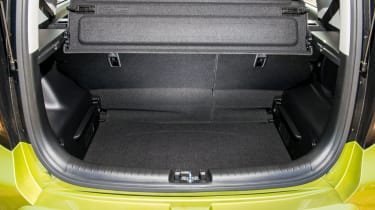 Boot accessibility is good thanks to the large bootlid, but a small loading lip means you can't quite slide items straight in. It's possible to move the boot floor to several different heights, or lift it up to find the temporary space-saver spare wheel underneath.

In the EV, boot capacity drops to 281 litres because of a temperature-control system for the batteries, but this doesn't affect the main luggage area, because it's located under the floor. There's also 80mm less legroom in the back of the EV because of the batteries, but you can negate this by rearranging the angle of the rear seats.