While the best crossovers offer the chunky looks of an SUV with the running costs of a small car, the Kia Soul lags well behind rivals, returning surprisingly poor fuel economy. In 2019, the Soul model range was reduced to a single model, a super-efficient EV which is easy to drive and similarly practical to the petrol and diesel models, it's significantly more expensive to buy.

While petrol engines can often make sense if you travel short distances, we'd recommend the Soul diesel with a manual gearbox, thanks to its half-decent fuel economy and relatively low Benefit-in-Kind (BiK) liability for company-car drivers. This should also be the most desirable version on the used-car market, boosting its potential resale value.

The Soul's 1.6-litre 130bhp petrol engine manages a measly 43.5mpg, dropping to just 40.9mpg in the Soul Sport. CO2 emissions are rated at 152 to 156g/km. The Soul was only ever tested under the old NEDC economy and emissions testing regime, rather than the far stricter current WLTP testing. Meaning the petrol models are only likely to achieve fuel economy figures in the mid-30s at best.

To put this into perspective, the Kia Soul Sport is far thirstier than petrol powered hot hatchbacks such as the Ford Focus ST and Renault Megane RS. Also, the standard Soul hatchback, with a 130bhp petrol engine cannot match rival models such as the 2008 and Juke, with both offering far better fuel economy and lower CO2 emissions. 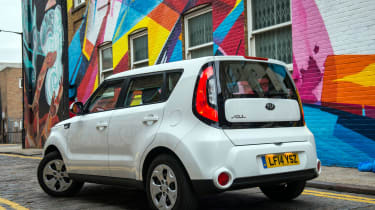 The 134bhp 1.6-litre Kia Soul diesel isn't that much better, with a claimed fuel economy figure of 58.8mpg and CO2 emissions of 127g/km. Choose the automatic 1.6-litre diesel Soul and consumption increases to 56.5mpg, while CO2 emissions are 130g/km.

After the first year's CO2-based road tax (generally included in the on-the-road price), all Kia Souls cost £145 a year to tax. 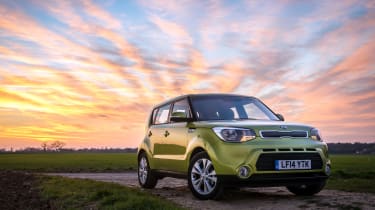 As regards resale values, the Soul isn't quite as good as its closest rivals, but the entry-level petrol and diesel versions are your best bet for the lowest depreciation.

Insurance shouldn’t be too pricey, as the Kia Soul falls into insurance group 10 to 11 for the 130bhp petrol and diesel models, while the Soul Sport will be more expensive to insure, as it’s rated in group 21.

This is where the Soul excels, benefiting from Kia’s class-leading seven-year/100,000-mile warranty, which no other manufacturer comes close to beating.

Kia offered a pre-paid package for the Soul called Care-3 that covers maintenance for the first three years (or 30,000 miles) starting from just over £300. You can also choose a five-year package. All of these can be transferred from one owner to the next – just like the seven-year warranty.

The Soul’s service intervals will see you visiting the dealer annually. Petrol models run on a 12-month/10,000-mile cycle (whichever comes first), while diesels have a slightly longer 12-month/12,500-mile cycle.