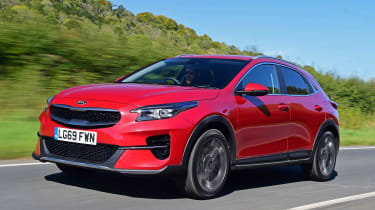 The Kia XCeed was launched with conventional petrol and diesel engines, but later this year the diesels will gain a 48-volt mild hybrid setup that should give efficiency a small boost. This will likely increase its price slightly but not by much, especially when absorbed into the monthly payments of a finance deal. We’ll welcome the improvements, however small, as the diesel engines can’t match the economy of rivals.

A plug-in hybrid Kia XCeed has now been launched, sharing the same powertrain as the Kia Niro, which uses a 1.6-litre petrol engine, 8.9kWh battery pack and electric motor for an EV range of up to 36 miles. You’ll need to keep the battery topped up to see the best fuel economy figures. 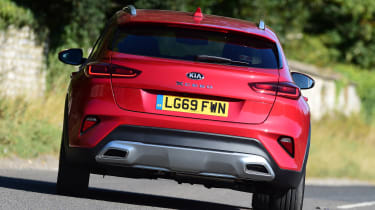 The standard XCeed offers decent (if not class-leading) fuel-efficiency figures, close to those of the Ford Focus Active. The smallest 1.0-litre T-GDI petrol can manage up to 45.2mpg with CO2 emissions of 140g/km, making it fairly expensive for company-car drivers.

Pick a 134bhp diesel instead and your economy figure could increase to 53.3mpg but CO2 emissions of 138g/km will still make it expensive for Benefit-in-Kind (BiK) tax payers.

It’s the plug-in hybrid that makes the best choice for company-car drivers; its 32g/km CO2 output means BiK will cost about a third of the petrol and diesel models. The XCeed PHEV is an expensive choice for private buyers, but the 36-mile range is commendable and it’s said to manage up to 201.8mpg.

Insurance groups start from just 12 for the 1.0-litre petrol engine in '3' trim, with the '2' version of the same engine in group 15, presumably because it has less safety kit fitted. The 1.6-litre diesel is in group 15, while the 1.4-litre petrol sits in groups 16 or 18 depending on trim level. PHEV models are in group 18 too.

Kia's generous warranty has been key to the brand’s success and its seven-year/100,000 mile warranty also covers the XCeed. It certainly looks appealing next to the three-year/60,000-mile cover offered with the Focus Active and Volkswagen T-Roc.

Petrol versions of the XCeed need servicing every 10,000 miles or 12 months, whichever comes soonest. The diesels suit high-mileage drivers better, needing attention every 12 months or 20,000 miles, potentially saving hundreds of pounds a year if you rack up miles quickly.