Thanks to the fact that the Lamborghini Gallardo was designed and built under the guidance of the VW Group and parent company, Audi, it manages to expertly blend German engineering with Italian style and flair. It gets a selection of powerful engines, a choice of manual and automatic gearboxes and either two or four-wheel drive. There has been a selection of hardcore special editions including the bonkers, lightweight Gallardo Balboni, as well as the current Superleggera and Spyder Performante – all of which offer incredible performance and an exhilarating drive. If you’re looking for a useable, practical, every-day supercar, the Gallardo will cope, but with just 110-litres of bootspace, the Aston Martin Vantage offers almost three-times as much carrying capacity. However, as with any Lamborghini, the Gallardo is a car you buy with your heart rather than your head, and is one that’ll never fail to put a smile on your face.

With its high insurance costs and thirsty V10 engine, the Gallardo is never going to be a cheap car to own. Despite its huge petrol tank, combined mileage of around 19mpg means that the Gallardo can only manage a total range of around 380 miles if driven conservatively. If anything breaks or happens to go wrong, repairs are expensive, too – even though it shares a lot of parts with its Audi siblings. It’s worth noting that the current Gallardo is based on a 10-year-old design, with cars like the Ferrari 458 and Mercedes SLS representing a much more modern offering.

Huge amounts of straight-line speed with lots of grip

Given the fact that the Gallardo is now ten years old, the lightweight Lamborghini is seriously fun to drive - but it's not up there with the best. With a top speed of more than 200mph and huge amounts of grip through the corners, there are very few surfaces that the Gallardo doesn't feel completely at home on. The four-wheel drive LP560-4 and LP570-4 Superleggera models helps its all-weather ability, but the automatic eGear gearbox is best avoided. When Lamborghini visually updated the Gallardo in 2013, it failed to gift it the improved S Tronic automatic gearbox from the Audi R8 V10 – and it’s a wonder why, as it’s a far superior system and better suited to the high-revving engine. The convertible Spyder gets the same engines and gearboxes, and but even more sense of occasion as you hear the engine rev right behind your head. The steering is perfectly weighted on all models, while its refined ride means it is surprisingly good around town, too.

The Gallardo is surprisingly comfortable over rough surfaces

Despite its stiff suspension set-up and low ride height, the Gallardo feels surprisingly refined over rough surfaces. It is comfortable around town and inside there is more than enough space to comfortably sit both passengers. Thanks to the fact that Lamborghini is now owned by parent company, Audi, the interior is extremely well made – with some familiar switches and a top-quality feel.

Not the most impractical car on the road, but not far off

Like the majority of supercars, practicality is not high up on the Gallardo's list of priorities. Inside, however it is extremely comfortable and there is a good amount of space for both driver and passenger. The dashboard is stylish and logically laid out and the familiar Audi buttons and switches feel well made. Boot space is almost non-existent though, so if you're planning lots of long trips, you’ll be better off with a Bentley Continental GT or Aston Martin Vantage.

Following its bigger brother, the Murcielago, the baby Gallardo was the next Lamborghini to be designed and built entirely under VW Group ownership. As a result, Lamborghini had a huge amount of additional technical knowledge at its disposal and the improvements are astounding. Using an aluminium bodyshell and spaceframe chassis, the Gallardo is just about as light and as strong as it possibly can be. Combine this with its immaculate build quality, top-class equipment and VW's high levels of reliabilty and the Gallardo has some seriously strong credentials. In terms of safety, there are four airbags as standard, as well as stability control and ABS – though unsurprisingly the little Lambo has never been crash tested by Euro NCAP.

There’s no denying the ‘entry-level’ Lamborghini is an exclusive, expensively priced supercar. There are a lot of things you can buy for the cost of a Gallardo but very few that will draw as much attention or be as much fun on a twisty road. Made under the guidance of Volkswagen Group and using only the very best materials available, the Gallardo's quality is undeniable. It is also a surprisingly versatile car with impressive driving capabilities around town and a comfortable ride over even rough British roads. The long list of customers queuing up to buy them and very few for sale on the used market, keeps the residual values up, too. A replacement isn’t due in the UK until at least 2015, either. 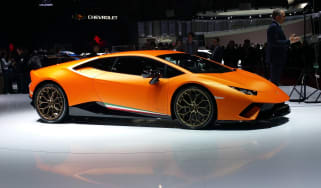