The Lexus UX is reasonably spacious for passengers, but boot space is tight

The restrictions enforced by the Lexus UX's compact overall dimensions presented its designers with a major challenge when it came to interior packaging, and the sleek crossover is further hamstrung by its low, curvaceous roofline. As a result, although space inside is adequate, there's no mistaking the Lexus UX for a versatile family car.

Front-seat passengers get by far the best deal inside the UX, where the wraparound dashboard gives the driver a cocooned feeling without claustrophobia setting in. There's more headroom than you might expect, thanks largely to the low-set seats.

The same is true in the back, but the narrow windows don't let a great deal of light in. It means rear-seat passengers get the impression of there being less space than there actually is, and most will actually find knee and headroom adequate. 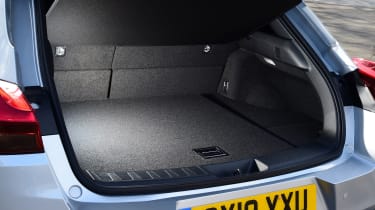 With a high floor, boot space is just 320 litres - a small size for the class and 150 litres less than the BMW X2 offers. Things get even worse with four-wheel drive fitted, because the extra mechanical hardware reduces boot space to 283 litres - less than you get in a Ford Fiesta.

The rear seats fold with a 60:40 split should you need to expand the boot without passengers on board, but the steeply raked rear windscreen puts paid to the notion of carrying bulky items.