The Lexus UX 250h uses a platform known as Toyota New Generation Architecture (TNGA), which underpins a range of cars as diverse as the Toyota Prius, Toyota Corolla and Toyota C-HR. That fact might not scream 'sporty', but prospective Lexus UX purchasers are in for a pleasant surprise.

Sitting in a driving position somewhat lower than that of most compact SUVs, you're well placed to get the most out of how the Lexus handles. That's no empty gesture, either, because the UX really does offer enough driving involvement to be a pleasure to drive. The steering is accurate and has a pleasingly weighty feel, while strong grip helps confidence in sharp corners. 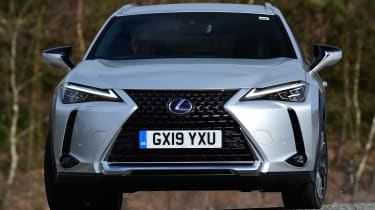 Lexus claims to have gone to some lengths to make the UX feel good to drive, taking the trouble to mount the steering rack directly to the chassis in an effort to reduce flex and vibration, and these efforts have definitely paid off; the UX is more fun to drive than the Audi Q2 and runs the BMW X2 close. What's more, the car's impressive resistance to lean in corners doesn't come at the expense of a hard ride, at least not with the optional adaptive damping system fitted. We've yet to evaluate how the standard suspension deals with road imperfections.

The UX is available with either front-wheel drive or 'E-Four' all-wheel drive, but the latter is intended more to maximise traction on poor roads and in adverse weather conditions than to bestow the UX with real all-terrain ability. For most buyers, we'd recommend saving the £1,200 or putting it towards a set of winter tyres for the front-wheel drive version. 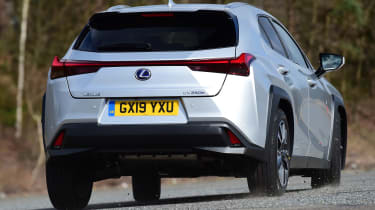 Only one engine is offered for the Lexus UX – the 250h. It's billed as a 'self-charging' hybrid, but that tag is little more than a positive spin on the fact that it has no plug-in facility. As a result, the UX can only move under all-electric power at moderate speeds, but it does bring a welcome degree of quietness in urban traffic.

The four-cylinder 2.0-litre petrol engine produces 144bhp and twin electric motors contribute 108bhp, making 0-62mph possible in 8.5 seconds. It feels quicker off the mark than the Audi Q2 fitted with a 1.5-litre turbo and driving is effortless thanks to a CVT automatic gearbox that proves smooth and seamless in operation. Unusually, the paddles either side of the steering wheel aren't for changing gear, but for setting the rate of regenerative braking. This system uses energy released during deceleration to help charge the UX's hybrid battery.

The E-Four four-wheel drive version gets an extra motor for the rear wheels, providing up to 7bhp and 55Nm of pulling power but also adding 60kg of weight. In most driving situations it feels identical to the front-wheel drive version, with enough electric assistance to prevent the petrol engine from feeling overworked. However, with less weight, the standard UX can run in EV mode more often, so unless you park on a slippery field or track every day, the benefits are marginal.