While there’s no way of completely disguising the much higher weight of SUVs compared to small sports cars, manufacturers are getting better at doing it. BMW in particular makes some very sweet-handling SUVs, such as the X3 and X5, and we can now add the Levante to that list.

It feels solid and planted on the road, with smooth, well judged steering and a suspension system that lets you feel what the wheels are doing. The Levante isn’t as good to drive as a Porsche Cayenne but it resists body lean well and feels agile for such a big car. 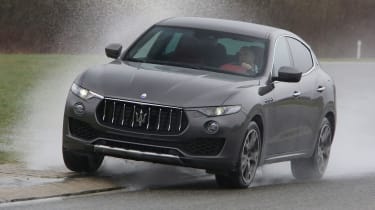 As well as being a good motorway tool, the Levante is capable of ‘waking up’ nicely when you want it to. There are four driving modes to choose from: Normal, Sport, Off-Road and ICE. The first three are self-explanatory, while the latter stands for ‘Increased Control and Efficiency’ and makes the Levante run as economically as possible.

In Sport mode, the accelerator becomes more responsive and the exhaust gets louder. A second click of the ‘Sport’ lowers and stiffens the suspension for the best possible handling on the kind of smooth, twisty open roads more commonly found in southern Europe than the British countryside.

Do note that the update Maserati gave the Levante in 2017 saw its hydraulic power steering setup replaced with an electronic one. While this configuration may bring incremental improvements in terms of economy, it also robs the Levante of much of its steering feel – an area where it previously impressed.

The Levante is powered by a diesel engine by default: a 3.0-litre V6 making 271bhp that gets the car from 0-62mph in 6.9 seconds. That’s hot-hatchback rather than supercar-like performance, but still impressively fast for a big five-seater SUV.

The standard gearbox is an eight-speed automatic and it’s an ideal partner for the engine, shifting gears smoothly and unobtrusively and letting the car run quietly at very low revs while cruising on the motorway. Gearchanges aren’t as fast as those of the automatic gearbox in the Audi Q7, especially when using the steering wheel paddles, so it’s best left in fully automatic mode.

An intelligent all-wheel-drive system is also standard equipment on the Levante, ensuring improved grip and poise in corners.

The Levante was initially only offered with a diesel engine, but Maserati has since had a change of heart and is soon to give UK buyers the option of the Levante S, which comes with a twin-turbo V6 3.0-litre petrol engine. This produces 424bhp and gets the car from 0-62mph in just 5.2 seconds.

The V6 engine found in the Levante S was developed in conjunction with sister brand Ferrari. It accelerates rapidly, sounds appealing under acceleration and works well with the eight-speed automatic gearbox. It is, however, a little coarse at idle, and does not represent the slam dunk one might have expected it to.