The Maserati Levante isn't quite as efficient as its direct rivals

Buyers of large luxury SUVs tend not to be hugely concerned with running costs, which is a good thing for Maserati, as the Levante isn’t very efficient, even in the context of other quick SUVs. 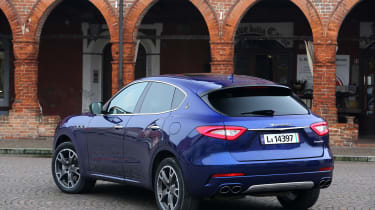 The diesel engine offered in the Levante returns 39.2mpg and emits 189g/km of CO2, so company car drivers will pay a top-rate Benefit-in-Kind (BiK) rate of 37%. Other high-performance diesel SUVs do marginally better: the BMW X5 M50d manages nearly 43mpg and emits 173g/km for 36% BiK, while the Porsche Cayenne claims official economy of 41.5mpg and CO2 emissions of 179g/km for the same 37% BiK rating.

Opt for the V6 petrol Levante S and you might reasonably expect economy to suffer, but its official efficiency figure of 25.9mpg is hard to swallow when the BMW X5 xDrive50i is faster, has more power, comes with a larger V8 engine and officially manages almost 30mpg.

Due to a new road tax system, all Levantes will cost £140 a year to tax; however, because its list price is over £40,000, you'll face and additional levy of £310 a year, which is payable from years two-six of the car's life.

If you want a cheaper-to-run Levante than that, you’ll have to sit tight for a while, as although Maserati is developing a plug-in hybrid version of the car, it’ll be at least late 2017 or possibly 2018, before it’s on sale.

Exact UK insurance ratings for the Levante have yet to be confirmed, but given its relatively high price and prestigious badge, insurance is unlikely to be cheap.

The Levante should get the same three-year/unlimited-mileage manufacturer cover as other Maseratis, which will appeal to high-mileage company-car drivers who may fall foul of the 60,000-mile limit imposed by some rival brands such as Audi.

Precise servicing costs for the Levante in the UK aren’t known just yet, but for guidance, a minor service for the Maserati Quattroporte saloon costs around £600 and a major one just over £1,000.