"It might not be the fastest car McLaren makes, but the McLaren 600LT Spider is arguably the most fun" 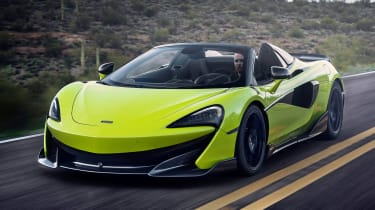 In a similar vein to the RS models revered by Porsche enthusiasts, the LT badge (short for 'Longtail') is becoming synonymous with particularly special McLarens. Indeed, the coupe version of the McLaren 600LT has already been named Car of the Year by our sister title Evo magazine.

Using the underpinnings of the McLaren 570S Spider, the 600LT Spider is up to 100kg lighter (if you forgo luxuries like air-conditioning) and features uprated suspension and new lightweight brakes. It also gets track-focused Pirelli P-Zero Trofeo R tyres designed to provide eye-watering grip on track.

The same 592bhp version of McLaren's 3.8-litre V8 sends all its power to the rear wheels and pushes the 600LT from 0-62mph in just 2.9 seconds. Most importantly, with the folding three-piece roof stowed, the LT’s top-mounted lightweight exhausts sound their visceral best. When the weather isn't good enough to take the roof off, just dropping the rear window provides an amazing boost to the soundtrack. 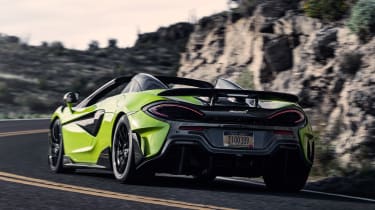 Shorn of the necessity to post record lap times, the 600LT Spider becomes one of McLaren’s best driver's cars. The steering wheel translates exactly what's happening in a way few modern cars can match, resulting in a perfectly balanced and playful driving experience. And perhaps the biggest surprise is that you can enjoy the car on public roads, despite the huge performance on offer.

The 600LT Spider has an official fuel economy figure of 23.2mpg, which looks quite respectable considering the immense performance served up by its engine. It helps that the supercar is light and the engine is turbocharged for greater efficiency, but you'll need to drive very carefully or cruise on the motorway to come close to the official number. Drive enthusiastically and the 600LT will go through fuel rather more quickly. 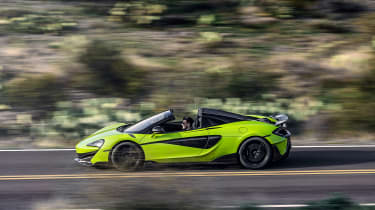 As with any focused performance car of this type, the 600LT is guaranteed to be in group 50, while road tax will cost £450 in the first five years of renewal and £140 thereafter.

The McLaren 600LT Spider is fast and communicative

We've already given the McLaren 600LT Coupe full marks for how it drives and, thanks to the way the McLaren builds its cars around a strong carbon tub, removing the roof does little to dent the 600LT’s handling. The folding top only adds 50kg, so the 592bhp 3.8-litre twin-turbocharged V8 sends the 600LT Spider from 0-62mph in the same 2.9 seconds as the Coupe, and on to a top speed of 201mph. 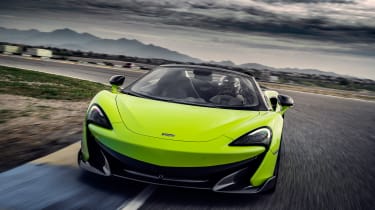 If anything, the Spider's handling impresses even more than the straight-line speed. The McLaren 570S is hardly dull to drive, but the modifications to the 600LT make it one of the best driver's cars on the planet. Reworked suspension and feelsome steering provide playful handling on track, and dropping the roof (or just the rear portion of glass) amplifies the soundtrack provided by the top-mounted exhaust pipes. Get to a corner and you'll probably be travelling faster than you expected, but the car then wows you again with its incredible brakes.

You don't have to hire a track to enjoy the 600LT because unlike McLaren's hypercars, the 600LT Spider feels alive even on public roads at far lower speeds. You could just about use it everyday too, so long as you don't plan on carrying too much luggage.

The 600LT Spider is more focused than the 570S Spider, but could still be driven everyday

McLarens have impressed in terms of ride quality in the past, and while the 600LT Spider does have a noticeably firmer edge than the 570S Spider on which it’s based, it can still rival hot hatchbacks for comfort around town. At higher speeds its expensive suspension works even more effectively, soaking up most bumps without jarring the car or its occupants. 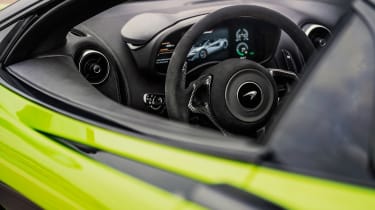 It's relatively easy to get in and out of the 600LT - especially with the roof stowed - and the seating position is excellent, although some may find the standard carbon fibre racing seats uncomfortable on really long drives. It's not as luxurious as the 570S, with less sound deadening and trim, but the roof-down experience is still pleasant thanks to an electric glass wind deflector. It's a shame the infotainment system is frustrating to use, but that's a small issue when the driving experience is so good.

The retractable roof is quick and easy to use, folding up or down in 15 seconds and at speeds of up to 25mph, so there's no pulling over in a layby to fiddle with it. Like the Coupe, the Spider has a luggage compartment under the front bonnet that’s capable of swallowing a few soft bags for a weekend away. With the roof raised, there's also an additional 52 litres of space in a tonneau storage area behind the seats.

Despite its remarkable growth as a sports car manufacturer, McLaren still sells just a few thousand cars a year globally, so reliability data is hard to come by. There were some reports of electrical issues with early examples of the 570S, the car on which the 600LT is based, but McLaren was quick to issue updates and we'd expect similar customer support if any issues were to arise. 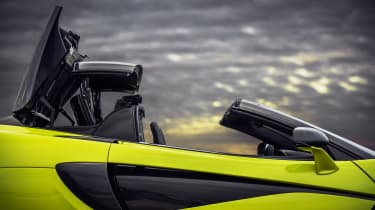 Safety is also somewhat unknown in the traditional sense because Euro NCAP doesn't crash-test supercars. However, it's reassuring that the carbon fibre chassis forming the 600LT's backbone is incredibly strong. It's also fitted with airbags and sophisticated electronic stability control, traction control and hugely powerful brakes.

Starting from just over £200,000, the McLaren 600LT Spider costs around £16,000 more than the coupe version. That's not an insignificant sum, but added to a purely emotional expense for those who can already afford a supercar, it's unlikely to cause much hesitation. That's even more the case considering the 600LT is likely to be a rare and sought after model that quickly sells out, with McLaren limiting its production. 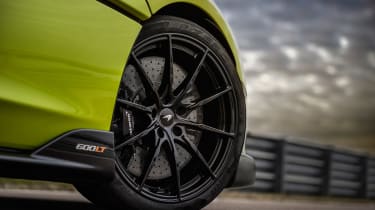 The 600LT Spider is well priced to compete with key rivals like the Ferrari 458 Spider and Lamborghini Huracan Spyder, while you can also customise it to an impressive extent. Not only is it a good idea to add no-cost air-conditioning (even if it adds extra weight), you can also fit the 'Super-Lightweight' carbon fibre seats from the McLaren Senna.

McLaren Special Operations (MSO) will also fit the 600LT with carbon fibre parts, Alcantara interior trim and a system that uses three cameras mounted around the car and telemetry to record on-track performance for analysis in the pit garage or at home.