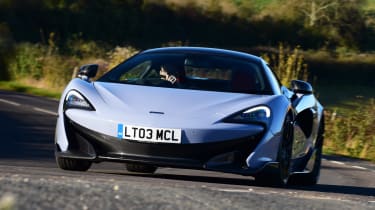 Anyone who wished that the spectacular McLaren 570S was just that little bit sharper, more powerful and more responsive will be delighted that the 600LT has arrived. It adds a further 30bhp to the 570S’ power output to produce 592bhp in total, drops the 0-62mph time below the magic three-second mark, and unlocks a top speed of 204mph.

Going extremely fast in a straight line is just one string to the 600LT's bow. While more firmly set up than the 570S, it’s still remarkably comfortable when you want to relax, matching the smoothness of an executive saloon on the motorway. And while its fixed racing seats appear intimidating, there's no shortage of comfort when you're behind the wheel. 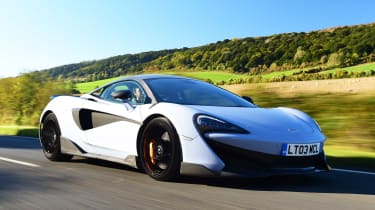 McLaren expects the 600LT to be used for more than just cruising, which is why there’s no radio, sat nav or carpets. Weight saving was a top priority when designing the car, and includes the use of carbon fibre for much of the bodywork and the car’s eye-catching rear wing, front splitter and rear diffuser.

Those parts aren’t just for show either; they produce 100kg of downforce, which is best felt when you take the 600LT onto a race track. McLaren expects many owners to do just this, so it wears special high-performance tyres that perform at their best when allowed to warm up – just the job on the circuit, but not quite as helpful on a cold, wet country road. On a warmer day, the 600LT is almost as able to thrill at road-legal speeds as it is when unleashed on a race track. 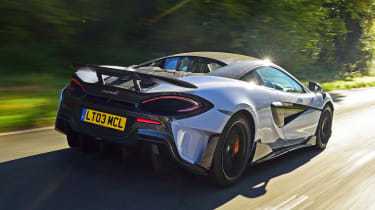 Some will question whether the 600LT is worth the extra cost compared to the 570S but it’s hard not to love it. Its incredible capabilities mean the 600LT steps on the toes of its astonishing – and even more expensive – 720S stablemate. It can also trade punches with the Ferrari 488 GTB and Aston Martin DBS when it comes to performance, and is more nimble in corners than an Lamborghini Aventador or the Ferrari 812 Superfast.

The 600LT is one of the most desirable cars that McLaren has ever made, and though you may occasionally yearn for some of the absent creature comforts, there is no doubt that it’s one of the finest drivers’ cars currently on sale.

McLaren claims an official fuel economy figure of 24.1mpg for the 600LT but we advise you to regard that kind of efficiency as a goal, rather than an expectation. Official fuel economy figures are calculated according to a set pattern of laboratory-simulated driving conditions and these are unlikely to reflect how supercars like the McLaren will be driven much of the time.

That 24.1mpg figure, however ambitious, is virtually the same as Ferrari claims for the still more powerful Ferrari 488 GTB, and the McLaren's 276g/km CO2 emissions output is higher than that of the Italian car too. Of course, the 600LT will face eye-watering insurance and maintenance costs like any other supercar, with expenditure on consumables such as tyres and brakes sure to mount up if you exploit the car's full potential.

Road tax will cost £450 per year for the first five years, dropping to £140 per year the sixth time it's renewed.

600LT builds on the 570S' already impressive speed and agility

The 600LT's name boldly advertises its power output, which at 600ps (592bhp) is 30 more than the same 3.8-litre twin-turbo V8 engine develops in the 570S. All that power is on tap by the time the rev counter needle reaches 7,500rpm but the engine will happily rev to 8,500rpm and the sound of it doing so only adds to the excitement.

It may not be the most characterful V8 engine we’ve ever heard but its vicious snarl is still intoxicating, and perfectly matches the way the car sizzles from 0-62mph in just 2.9 seconds.

The car is capable of 204mph but the McLaren isn’t focused on straight-line speed alone, and the extra 100kg of downforce provided by the 600LT's carbon fibre wing, front splitter and rear diffuser help it to stick to twisty road or track surfaces like the proverbial leech.

In truth, you need a racing circuit if you plan to get anywhere near exploring the 600LT's limits, so McLaren has fitted special Pirelli Trofeo R tyres and powerful brakes to make sure it excels on a track day. The car feels far more on-edge than the 570S, and when the turbochargers spool up, acceleration feels just as brutal as the g-forces the 600LT can generate in corners. The tyres are a little short on grip when cold, but once they warm up it feels as if the McLaren is locked to the road, while the steering has all the feel and feedback you need for confident, fast driving.

Best of all, though, is that the 600LT has the same ability to entertain at lower, road-legal speeds as the less powerful 570S. That precise, tactile steering makes every country lane a pleasure, and the engine responds just as sweetly at lower revs as when you let it off the leash.

The McLaren 570S amazed us with its almost limousine-like ride quality, and – while noticeably stiffer – the 600LT still rides as smoothly as any of any of today's hot hatchbacks. When trundling around town those big wheels and wide tyres will thump into potholes, sending a shock through the car, but that crashiness dissolves as you build up pace. Once at motorway speeds the 600LT feels as smooth as a BMW 3 Series. 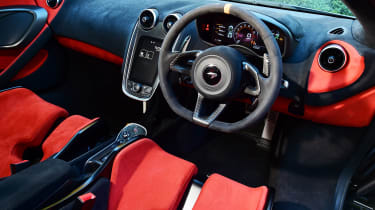 Based on the 570S, the 600LT looks similar but is set aside by its carbon-fibre roof, fixed rear wing, rear diffuser and front splitter. A look inside reveals that the air-conditioning, radio and sat nav have all disappeared in a bid to add lightness, but all can be added from the options list if you want a truly civilised supercar.

As with other McLarens, interior quality and finish are superb. Every car has a bespoke, built-to-order feel, and you'll not hear a creak or rattle even on broken road surfaces.

Supercar space limitations apply, but the 600LT is far from the hardest supercar to live with

A clear view of the road ahead is vital in a racing car, and the McLaren 600LT brings that thinking to the road in the same way as its 570S sister. Those upward-opening doors aren't just dramatic to look at – they make it easy to get in and out of the car in tight parking spaces, even if they could be a pain in a low-ceilinged car park. 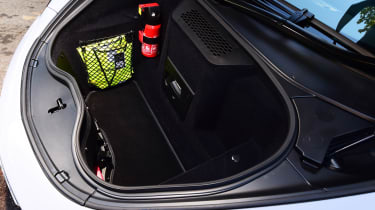 The 600LT does have some luggage capacity, but the 150-litre front 'boot' is shaped in such a way that soft, deformable holdalls are your best option. You might fit a few bags in the gaps between the rear seats and the engine compartment bulkhead, but storage is otherwise in short supply. For regular overnight trips in a seriously fast car, the Porsche 911 Turbo may prove rather easier to live with.

McLaren Automotive might have been very successful since its inception in 2010 but it still sells cars in relatively small numbers. That makes it very difficult to make a sound judgement on how satisfied McLaren owners are with their cars. We do know, however, that brand loyalty is high – in the same way as Ferrari owners often return to buy the latest model.

When the 570S – the car on which the 600LT is based – was introduced, some teething troubles were reported. Electrical gremlins were the most common, but software updates have been frequently issued since then, and we've heard of few issues since.

Supercars like the 600LT don't face the independent Euro NCAP crash tests that more ordinary cars do, but the sheer strength of McLaren's carbon fibre chassis means it ought to hold up well against the forces of an impact. There's a multitude of airbags, too, and the combination of advanced electronic stability control hardware, grippy tyres and powerful brakes reduce the risk of an accident.

Sublime McLaren 600LT ranks among the most satisfying ways to spend £185,000

Although it appears in McLaren's range brochure and price list, any car as exclusive as the 600LT is still essentially bespoke. Aside from the choice of restoring the deleted radio, air conditioning, sat nav and carpets, there's a long list of other options available so you can tailor your supercar to almost any whim. 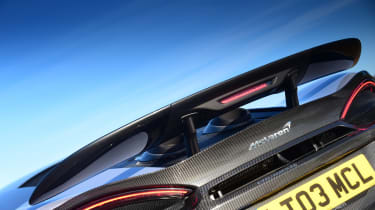 This flexibility of the 600LT’s specification broadens the number of cars it rivals, with the Ferrari 488 GTB, the Aston Martin DBS and the most powerful versions of the Porsche 911 all providing similar performance. For some, the McLaren 600LT will be an addition to an existing supercar fleet, or will simply represent £185,000 being spent on a sports car instead of a luxury saloon or SUV. 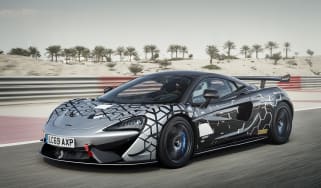 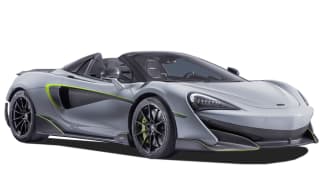 "It might not be the fastest car McLaren makes, but the McLaren 600LT Spider is arguably the most fun"
Skip to ContentSkip to Footer