There's no denying the A-Class saloon's boot is bigger than the hatchback's, but it's also not quite as versatile 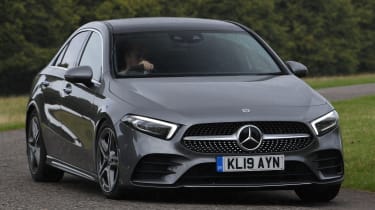 The A-Class saloon is 130mm longer than the hatchback, with most of this growth spurt accounted for by the elongated boot. The distance between the front and rear wheels is exactly the same, so interior space for passengers in the back is about the same, while the boot is larger but accessed by a smaller opening. 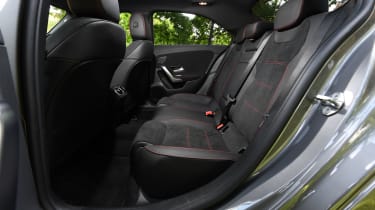 While some conversions from hatchback to saloon result in a boost to back-seat kneeroom, there's no such change here. There's enough space for adults, though, and the roof doesn't dip too abruptly, so there's still a reasonable amount of headroom. 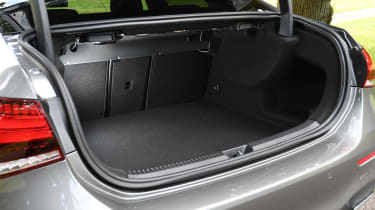 Offering 420 litres of space, the A-Class saloon's boot is five litres down on the Audi A3 saloon's, but has 50 litres more space than the hatchback. That's plenty of room for several suitcases, but also not quite the full story. Despite a wide 950mm opening, the boot aperture is still much smaller than the hatchback's, so it won't be for everyone.

If you plan on towing, the A-Class saloon is a pretty good choice for a smaller model. The A 180 d diesel can haul a braked trailer weighing up to 1,400kg, while the A 200 petrol is rated to tow 1,600kg; plenty to manage a fairly large caravan.