As ever with this sort of car, how much it’ll cost you to run very much depends on which version you go for. On the one hand, the diesels and smaller petrol engines are reasonably economical, but at the other end of the scale, there is a twin-turbocharged petrol V6, which, frankly, isn’t.

The smallest petrol engine in the range, the 1.5-litre four-cylinder in the C200, uses Mercedes' EQ mild-hybrid technology to boost power and efficiency. Economy of 44.1mpg is claimed, which isn't bad for a 184bhp four-seat convertible. CO2 emissions of 145 g/km place the C200 in the 30% bracket for Benefit-in-Kind (BiK) company car tax. A 2.0-litre turbocharged C300 is set to join the range later.

The C220d uses a 2.0-litre, twin-turbocharged four-cylinder engine, delivering 194bhp and achieving up to 58.9mpg. CO2 emissions are 126g/km when the standard 18-inch wheels are fitted, and means a 30% Benefit-in-Kind (BiK) company-car tax rating.

You won't find a new C-Class Cabriolet for less than £40,000, so you can expect an annual road-fund license cost of the usual £140 plus a yearly £310 surcharge. It means you'll pay £450 at the end of each of the first five years of ownership. After year six, the £140 fee applies. 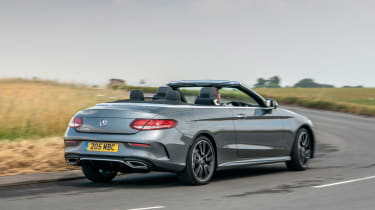 Like all Mercedes, the C-Class cabriolet comes with a three-year, unlimited-mileage warranty, which puts it on a par with BMW and slightly ahead of Audi, which offers a three-year/60,000-mile warranty.

Mercedes offers a service plan for all its cars, which includes both parts and labour for all services over the first two to five years. Also, if you buy on finance (as the majority of people do nowadays), Mercedes often offers free servicing to sweeten the deal.

The Association of British Insurers (ABI) has yet to announce every insurance rating for the 2018 C-Class Coupe, but the C200 sits in group 38 out of 50, while the C220d finds itself in group 42. These are high groups, partly due to the cabriolet’s fabric roof and the reduced security this offers, however rivals like the Audi A5 Convertible sit in similar groups.