This isn’t the Mercedes C-Class Cabriolet’s strongest suit, but it’s no worse than rivals

Let’s face it: you don’t buy an upmarket, four-seat cabriolet because you want a really practical car. Having said that, the C-Class cabriolet isn’t too bad when you compare it to its rivals. 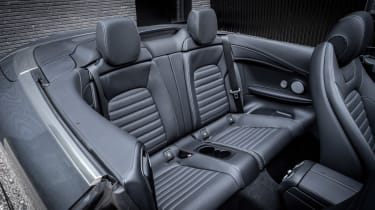 Up front, the C-Class Cabriolet is just as practical as the saloon and coupe, with decent-sized door bins, and some useful storage space in the centre console and in the armrest. The long doors can make getting into the car a struggle in a tight car parking space, especially if the roof’s up, while getting in the back is even more awkward. The front seats don’t quite slide far enough forward to allow you to keep all your dignity when clambering in and out, but it’s no worse than the BMW 4 Series convertible in this regard, or the Mercedes C-Class Coupe for that matter. 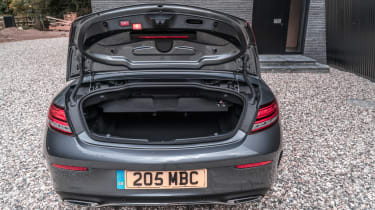 As always with a convertible, boot space is at something of a premium. With the roof up, there’s 360 litres of load capacity, but this drops to just 285 litres with it down - about the same as a Ford Fiesta. This doesn’t sound awful, but it’s not a particularly practical shape and is rather shallow, so you won’t be able to rely on the car for transporting anything more than a couple of suitcases or the weekly food shop in the boot. Again - the equivalent BMW 4 Series Convertible is no better in this regard.