“If you’re after a refined, classy four-seat convertible, then the Mercedes C-Class Cabriolet could well be for you”

Following on from the saloon, the estate and the coupe, the Mercedes C-Class Cabriolet is the final piece of Mercedes’ compact executive puzzle. Although the company has put many small, ‘premium’ four-seat convertibles on sale in this sort of market before, they’ve never been so clearly marked out as part of the C-Class family. This generation is, in fact, the first Mercedes C-Class Cabriolet.

This puts it up against some strong rivals. The BMW 4 Series Convertible is the most obvious, while Audi A5 Cabriolet also provides stiff competition. In terms of direct rivals, however, that’s about it, but sports cars such as the Porsche Boxster are an alternative if you can live with a little less everyday practicality. 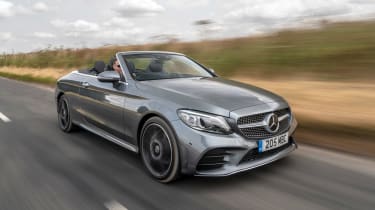 A 2018 update made it easier to choose your perfect C-Class Cabriolet by somewhat narrowing the range. There are now only four petrols and two diesel engines. The 1.6-litre turbocharged C180, mild-hybrid 1.5-litre petrol C200, a 2.0-litre petrol C300 and a 3.0-litre, twin-turbocharged six-cylinder Mercedes-AMG C43 4MATIC, with the latter using Mercedes' four-wheel-drive system. All are relatively fast, but fuel economy varies considerably. On the other hand, the C220d diesel is both rapid and economical – a potential 58.9mpg is claimed.

Only one trim level is offered. Named AMG Line, it brings an aggressive bodykit and 18-inch wheels across the range, along with a pretty comprehensive list of standard equipment. LED headlamps are fitted, as are climate control, an infotainment system with DAB radio and a 10.25-inch display, plus keyless go. It also features Mercedes' Airscarf system, which directs a blast of warm air to the necks of front-seat occupants, leaving you with no excuse to avoid going topless whenever it's not raining.

Even with the roof down, an Aircap wind deflector means the car remains impressively quiet and unruffled; only those with the most extravagant hairstyles will feel disturbed by the very mild buffeting. Meanwhile, if you put the triple-layered fabric roof up, you’d be forgiven for thinking you’re in the coupe, such is the lack of either wind or tyre noise. 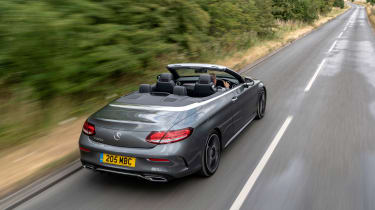 Every C-Class Cabriolet is enjoyable to drive – perhaps not as sharp as the BMW 4 Series Convertible, but offering a substantial feel through the controls and a real effortless character on the road that makes it well suited to long-distance cruising. The high-performance AMG C43 is by far the most exciting model in the range – Its twin-turbocharged 3.0-litre petrol V6 is good for 385bhp and 0-62mph in 4.8 seconds, while its top speed of 155mph is electronically limited. As with all C-Class Cabriolets (except the C180), a nine-speed automatic gearbox is standard.

The C-Class range finished 27th out of the 75 cars ranked in our 2018 Driver Power owner satisfaction survey of cars currently on sale in the UK, and Mercedes finished 20th overall, out of 26 brands surveyed. Euro NCAP awarded the car the full five stars when they crash tested it in the summer of 2017, and the C-Class cabriolet is full to bursting with safety kit.

The best convertibles aren't just toys for the summer, they can be used all year round. Here's our definitive guide to the drop-tops that offer the be…
Skip to ContentSkip to Footer