Much like its bigger brother, the S-Class Cabriolet, the C-Class Cabriolet is designed more as a boulevard cruiser than an out-and-out sportscar. Despite the weight of the roof mechanism and extra strengthening to make up for the lack of a fixed roof, ride quality hasn’t been too badly affected.

Keep the car’s suspension in its softest setting and it flows nicely across all but the harshest of bumps, soaking up the worst without any major issues. If you like, you can stiffen everything up by putting the Dynamic Select system in Sport+. However, on all but the most powerful C43, all you’ll really notice is a slightly harsher ride, while the steering is never quite as consistent as you’d hope either, whichever setting it’s in. 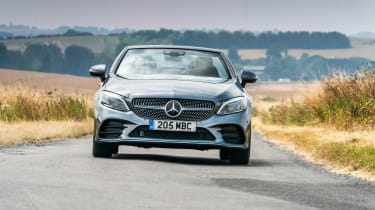 The Airmatic air suspension is standard on the AMG C43, while other models can be fitted with the system as part of the Dynamic Handling package for £900. It allows you to tune the suspension for stiffness or smoothness, depending on your mood and the road conditions.

A 2018 update saw a 2.0-litre twin-turbocharged diesel engine replaced the 2.1-litre that had been a range stalwart for over a decade. Although never short on power, it was a little rattly compared to some rivals. The replacement 2.0-litre is far smoother, while delivering an impressive 191bhp to get the car from 0-62mph in 7.5 seconds. It feels relaxed, helped by a smooth nine-speed automatic gearbox that makes good use of the torquey diesel.

The C220d is rear-wheel drive as standard, but 4MATIC four-wheel drive can be added. Its extra weight does affect performance slightly; we'd only recommend it if you live in a rural area with harsh winters. A more powerful version of the four-cylinder 2.0-litre is badged C300d, with 242bhp to cut the 0-62mph time to an impressive 6.3 seconds.

There's a bit of a gulf between the three petrol engines offered in the C-Class Cabriolet. The entry-level C180 has a 1.6-litre with 154bhp and the C200 has a 1.5-litre four-cylinder that uses Mercedes' EQ mild-hybrid technology to add 13bhp when needed, at the same time reducing fuel consumption. Its belt-driven 'starter generator' allows the engine to briefly shut down at times when little power is needed – even when the car is in motion. The C200 produces 182bhp and claims a 0-62mph time of 8.5 seconds.

The next petrol engine in the line-up is twice as big – a 3.0-litre, six-cylinder twin-turbo powerhouse that cranks out 385bhp – enough for 0-62mph in 4.8 seconds and an electronically limited top speed of 155mph. Power is transmitted through all four wheels, which maximises traction on loose or slippery surfaces – a great boost to driver confidence.