The Mercedes C-Class Estate is quick, but a BMW 3 Series Touring is more fun

If it’s a comfortable drive you’re after, then the Mercedes C-Class Estate is hard to beat. However, when you drive the Mercedes briskly, driver involvement and feedback is noticeably inferior to the BMW 3 Series Touring.

Behind the wheel, there's virtually no difference between the driving experience provided by the C-Class Estate and its saloon sibling. Both have precise, easy steering and controls are responsive enough to make driving a pleasure, but there's little sense of excitement or involvement – although the more powerful models do have a more muscular feel.

In comfort mode, the optional air suspension system makes the ride very smooth for motorway cruising, but can lean rather too much in corners for the tastes of enthusiastic drivers. Sport mode is the answer; the AMG-line' s standard lowered sports suspension maintains this attitude all the time, although it denies you the option of a smoother setting for long motorway trips.

Buyers of the entry-level SE model, meanwhile, have to make do with the standard comfort suspension, which isn’t as comfortable as the air suspension on the motorway or as good through corners as the lowered suspension on Sport and AMG Line cars. 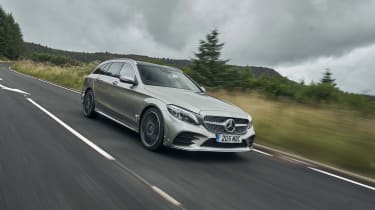 There's no doubt at all that, aside from the V8-powered AMG 63, which we’ve reviewed elsewhere, the Mercedes-AMG C 43 is the most exciting C-Class Estate to drive. It comes with four-wheel drive as standard, which means there’s plenty of grip, while the steering is accurate, if a little too light for some tastes. Even though it’s noticeably firmer than the standard car, it’s not uncomfortable – even in the harshest of its suspension settings (Sport+). It’s genuinely fun to drive through corners and the added security of four-wheel drive means you’re likely to feel confident pushing the car harder.

It might take a while for C-Class buyers to adjust to the automatic C 200 only having a 1.5-litre petrol engine under the bonnet, but it does get a turbocharger and an extra 14bhp in short bursts thanks to Mercedes’ EQ Boost technology. This adds up to a total of 195bhp when the 181bhp engine is being given a helping hand, for a reasonably brisk 7.9-second 0-62mph time.

Traditionalists may prefer the 2.0-litre C 300 with 255bhp that propels the Estate to the same benchmark in a hot hatch-like six seconds, before hitting a 155mph top speed.

Go for the AMG C 43 model and you get hair-raising performance – 0-62mph in 4.8 seconds and an (electronically limited) 155mph top speed – from its 385bhp twin-turbocharged 3.0-litre V6. This sends its power to all four wheels through a nine-speed automatic gearbox, which is complemented perfectly by the standard sports exhaust. Go for a full-throttle gear change (using the paddles behind the steering wheel) and it makes a very satisfying noise. If you’re just cruising at motorway speeds, however, the engine quietens down, with just a hint of wind noise from around the door mirrors. 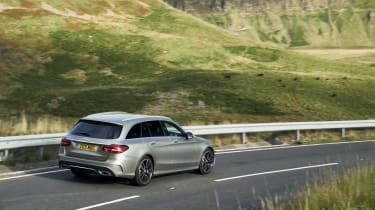 The C-Class Estate has until recently been offered with two diesel engines, both of which are punchy and economical. The most powerful diesel model, the Mercedes C 220 d, produces 191bhp and will go from 0-62mph in seven seconds, while the 158bhp C 200 d takes 8.7 seconds but is no longer available. The C 200 d and C 220 d use a 1.6 and 2.0-litre engine respectively, and both are quieter than the gruff 2.1-litre previously fitted in the C-Class, if still a fair way short of matching the smoothness of the petrol engines.

While a manual six-speed gearbox used to be offered, this is no longer the case, and we think the nine-speed automatic gearbox is a better fit for the Mercedes’ comfortable and relaxed feel.

Unlike most other models, Mercedes is offering both petrol and diesel versions of its plug-in hybrid technology. Both are fitted with a 13.5kWh lithium-ion battery pack and 120bhp electric motor, in addition to the internal combustion engine and nine-speed automatic transmission normally found under the bonnet.