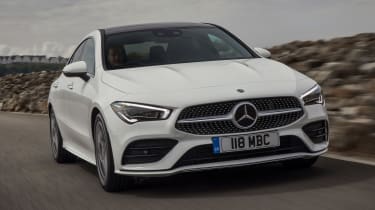 While the first CLA was very much an A-Class with a coupe-influence, Mercedes has aimed to give its second-generation CLA a more distinct personality. In keeping with its sporting design, this has largely focused on making the CLA better to drive than the more mainstream - and less expensive - hatchback and saloon versions.

For a start, the front and rear axles are 63mm and 55mm wider respectively. Not only does this give the CLA a wider, more assertive stance, it also has an effect on its handling. Broader shoulders help the CLA feel more responsive and reduce body lean through corners, giving it a clear advantage over the A-Class for driving enthusiasts. It also corners more enthusiastically than the Audi A3 and resists body roll better, giving it a more athletic feel. 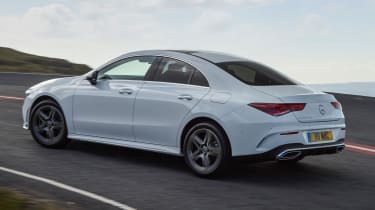 Badged CLA 180 and 200, the entry-level petrol engine is a 1.3-litre turbo that's found in the latest Mercedes models. With front-wheel drive and 134bhp or 161bhp, the 0-62mph time is dispatched in 9.0 and 8.2 seconds respectively, with smooth shifts from a seven-speed automatic gearbox. As in the A-Class, the CLA 200 engine felt powerful enough to convincingly deal with urban and motorway driving.

With a turbocharged 2.0-litre petrol, power in the CLA 250 model jumps to 221bhp, cutting the 0-62mph run to 6.3 seconds. This gives the 250 model hot-hatch levels of performance on paper but it doesn't quite translate to the driving experience. The automatic gearbox is the main issue, because it's slow to kick down and has a tendency to surge on upshifts, while the engine's soundtrack also fails to impress. There's a diesel-like clatter at idle, followed by a harsh, industrial sound at higher revs that feels out of place in a Mercedes.

At the top of the range are two fast AMG models, but these are almost separate models as they offer so much power and performance. The CLA 35 has 302bhp and a 4.9 second 0-62mph time, while the CLA 45 S is the top rung of the ladder, with an astonishing 415bhp and a 0-62mph time of just four seconds. 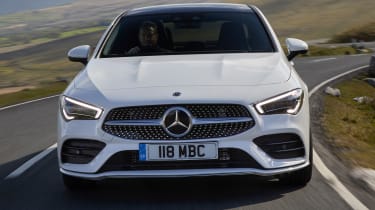 We’ve sampled the CLA 220 d on European roads. With 187bhp and 400Nm of torque, there's a strong surge of acceleration from low revs. This engine is also paired with a new eight-speed automatic gearbox that was both smooth and quick to change gears. Despite being very frugal, the diesel will hit 0-62mph in 7.1 seconds.

Launched in mid-2020, the CLA 250 e adds electrical assistance to the 1.3-litre petrol engine. The result is 215bhp and a 6.6-second 0-62mph time. We’ve sampled the same powertrain in the Mercedes A 250 e hatchback and found that the extra weight of the battery doesn’t make itself known unless you’re on a really windy road.