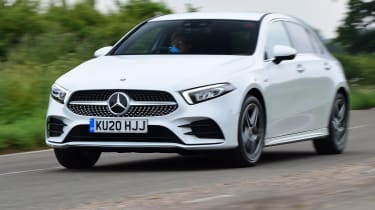 Manufacturers are rushing to launch electrified versions of their cars, and the Mercedes A-Class is one of the most desirable yet. Badged A 250 e, it looks just as good inside and out as the regular car, but boasts the advantage of an official 257mpg fuel-efficiency figure.

That's thanks to its large 15.6kWh battery pack and electric motor, making it possible to drive for up to 37 miles before the 1.3-litre turbo petrol engine is needed. Trifling tailpipe emissions of 37g/km will make it compelling for company-car drivers who pay tax based on CO2-based Benefit-in-Kind bands.

With 215bhp from the combined efforts of the engine and motor, the A 250 e is also pretty quick, getting from 0-62mph in 6.6 seconds. In electric mode, it'll let you accelerate quite briskly too, up to a top speed of 87mph before the petrol engine kicks in. Power is fed to the front wheels by an eight-speed automatic gearbox, which can be a little jerky, even in electric-only mode. Handling is confidence-inspiring, with plenty of grip and reactive steering, despite the extra weight of the hybrid powertrain. 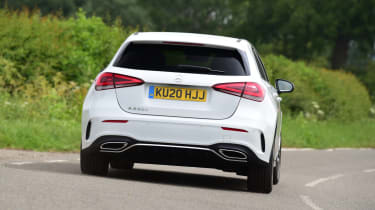 Available in AMG Line trim, or Executive, Premium and Premium Plus, the A 250 e is well-equipped from the off, with alloy wheels and LED headlights. Interior quality is first-rate, and looks especially good when two 12.3-inch screens are fitted side-by-side across the dashboard. Mercedes' MBUX infotainment system will feel familiar to smartphone users, with a similar interface and voice controls that use artificial intelligence to recognise questions like "Where's the nearest Italian restaurant?".

More reviews for A 250 e hatchback

We know safety is up to scratch thanks to a five-star Euro NCAP crash test result. Reliability is still unknown, and respondents to our Driver Power survey tend to find Mercedes servicing rather expensive.

The Mercedes A-Class has become incredibly popular, so it's good news that company-car and private buyers alike now have access to a plug-in hybrid version. The 1.3-litre petrol engine, 101bhp electric motor and 15.6kWh battery pack also ensures it has the hardware to really impress, with an electric driving range of up to 44 miles. In real-world testing we found this range is achievable, with the trip computer showing a range just a few miles short. In official figures, this results in staggering WLTP figures of 257mpg and 32g/km of CO2 emissions. As a result, BiK payments will be a lot lower than for petrol and diesel rivals. 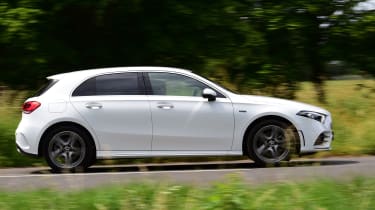 Charging from a home wallbox takes just under two hours (with a 7.4kW supply), while a public DC charger should top up the battery pack from 10 to 80% in less than 30 minutes. Buying the A 250 e in the first place is likely to be around £1,500 more expensive than for a petrol equivalent but for many the reduced costs will make it worthwhile. Road tax will cost a reasonable £140 a year, but Mercedes owners have told us that servicing costs tend to be rather high. The A 250 e also sits in insurance groups 28 and 29 out of 50, which are fairly high for a family hatchback.

With 215bhp from its combined petrol engine and electric motor, the A 250 e is no slouch, getting from 0-62mph in 6.6 seconds. Unlike some PHEVs that seem overly keen to use their combustion engines, the A 250 e will also allow a pleasing amount of acceleration in electric-only mode at speeds of up to 87mph. This is all the better considering the 1.3-litre petrol is rather coarse when working hard, which doesn't really fit with the Mercedes image. 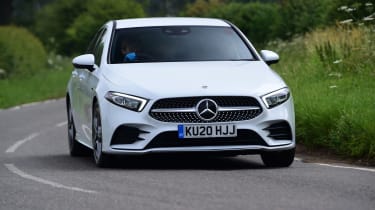 The addition of an extra motor and batteries does mean the A 250 e is around 150kg heavier than a regular A-Class, but this is only noticeable on really windy roads. Grip is plentiful and the steering responds quickly, but firm suspension means some bumps are particularly noticeable inside. More disconcerting are the shifts from the eight-speed gearbox, which aren't especially smooth in pure electric mode.

Several driving modes are offered, including ‘Electric’, ‘Comfort’, ‘Sport’ and ‘Individual’. In electric mode the steering wheel paddles are used to adjust regenerative braking instead of changing gear, which can be a bit confusing at first. This is especially the case because touching a paddle in Comfort mode can bring the petrol engine into life when you weren't intending to. Comfort acts like the hybrid mode found in many PHEVs, balancing electric and petrol power.

We're big fans of the A-Class' interior, which is right at the top of the pile for a family hatchback. Nothing changes for the PHEV version, but the A 250 e is limited to AMG Line, Executive, Premium and Premium Plus trims, so you can’t get it in a standard A-Class entry-level specification. 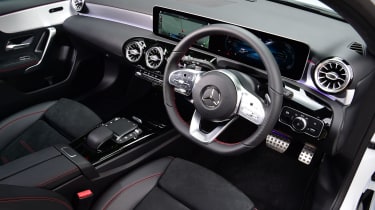 A seven-inch screen is standard but the 10.25-inch display in higher trims looks better as the bezel around the smaller item is a bit clumsy. In top versions the central display flows seamlessly behind the steering wheel, creating a really upmarket setup complemented by circular metallic air vents.

Front-seat occupants are well served, with lots of room and supportive seats. These also offer lots of adjustment, so you should be able to find your ideal driving position. Storage is quite good too, with door bins able to swallow drinks bottles and a central armrest that also doubles as a cubby. Headroom is decent, but there isn't quite as much legroom as you'll find in a Volkswagen Golf or BMW 1 Series. The middle rear seat isn't a great place to sit either, thanks to its raised shape. 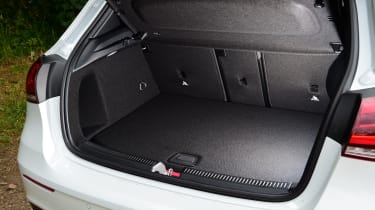 The boot is affected by the large battery pack but it should still be big enough most of the time. It measures 310 litres behind the seats (down from 370) and 1,120 litres with them folded down. The rear bench also splits 40:20:40, allowing two adults to sit in the back with the middle seat folded down for long items like skis or flat-pack furniture.

A five-star safety rating is good news for owners

The Mercedes A-Class performed well in our 2020 Driver Power survey, coming 36th out of the top 75 models in the UK. However, while respondents loved its styling and driving characteristics, reliability and build quality were scored below average. Encouragingly, only 12.8% of owners actually reported a fault in the first year. 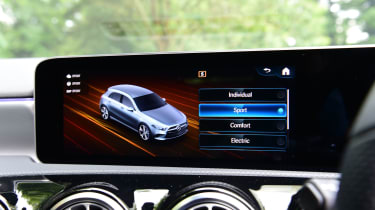 Safety should be excellent, with independent crash-test body Euro NCAP giving the A-Class a five-star result. It's fitted with the latest safety features, including autonomous emergency braking and lane-keeping assist. While it costs extra, an optional Driving Assistance Package may also appeal to long-distance drivers, with even more kit to make driving more relaxed.

There are so many attractive choices these days that picking the best company car can be quite a challenge. We look at the best of today's most popula…
Best plug-in hybrids