There are reasonably economical Mercedes CLS models, especially considering the power on offer

Mercedes boasts efficiency gains from the CLS' clever engine technology, but the improvements are incremental rather than miraculous. It's difficult to make a car as big and heavy as this truly economical, although the smaller four-cylinder diesel engine shows how fuel-efficient this smooth four-door coupe can be.

Drivers in search of a truly economical CLS will be looking at the entry-point of the range, the 300d, but the six-cylinder 350d and 400d diesels don't disgrace themselves when you consider how much power they offer.

You can expect up to 46.3mpg from the 300d - an impressive figure for such a quick car - with a CO2 emissions figure of 142g/km. This means company-car-tax payers will face a Benefit-in-Kind (BiK) rating one off the top bracket. The more powerful 400d falls into the top 37% band for BiK, and economy drops to 41.5mpg. 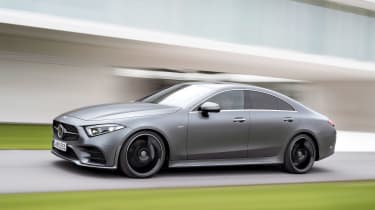 All the petrol engines make use of Mercedes' 'EQ Boost' mild-hybrid technology, which improves fuel economy and takes the edge off emissions. Don't expect a pat on the back from Greenpeace, though – the 350 can do 37.2mpg, the 450 returns 35.3mpg while the Mercedes-AMG CLS 53 manages just 31mpg.

BiK bands for the petrols match the diesels - the two most powerful options are in the top band, with the new 2.0-litre engine slipping into the next band down. They produce 163, 187 and 202g/km of CO2 respectively. With every CLS model priced comfortably above £40,000, you'll pay £465 each of the first five times your road-tax is due for renewal. After that point, it'll drop to £145 a year.

Don't expect any Mercedes CLS to have inconsequential car insurance bills. The Association of British Insurers (ABI) has placed every four-wheel-drive model in group 50, the highest group. The smaller engines haven’t got a confirmed insurance group yet. We suggest that you shop around for insurance quotes before making a buying decision. 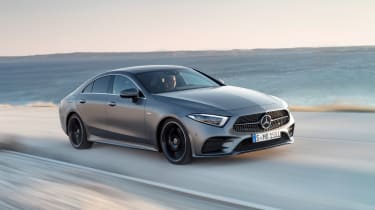 As with any Mercedes, a service is required annually or every 15,000 miles – whichever elapses first. Services alternate between minor and major, with certain additional operations such as brake fluid and fuel filter renewal considered separately. All routine maintenance can be covered by a service plan; these fixed-price packages can make budgeting easier, as well as reducing expense. Wear-and-tear items, including tyres that are at least 19 inches in diameter, will be expensive, and a car as heavy as the CLS will soon wear its expensive brake components out if regularly driven hard.

Mercedes provides a three-year/unlimited-mileage warranty on every car it sells in the UK – about the norm for a premium brand. You can buy an extended warranty when this elapses, but this isn't quite as comprehensive as the warranty originally supplied with the car.