Cutting-edge technology should ensure the Mercedes CLS is safe, but the brand needs to work on customer satisfaction

The three-pointed star endures as a respected and desirable badge. Even against the unrelenting rivalry of BMW and Audi, Mercedes maintains a loyal following. This is despite the fact that the brand's owner satisfaction, according to our surveys, is far from industry-leading.

To a certain extent, the latest Mercedes CLS represents uncharted territory for the brand. While the overall design is familiar, the straight-six engines and sophisticated mild-hybrid technology have yet to prove themselves. Until the CLS features individually in our annual Driver Power owner satisfaction survey, it's impossible to judge how dependable the latest model will be. 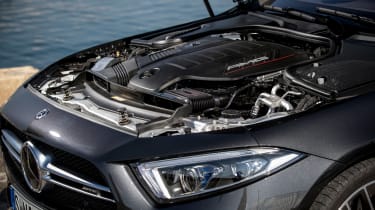 As a whole, though, Mercedes cars weren't rated especially highly by owners in our 2019 survey. Although only GLC and C-Class owners participated in sufficient numbers for their findings to be included, the resulting 26th finish didn't paint the brand in a positive light – only four manufacturers finished lower than Mercedes in our standings.

While owners are very happy with the power, acceleration and smoothness of their engines and gearboxes and said positive things about ride and handling, many were disappointed by a lack of driver involvement and steering feel. Interior comfort, fit and finish were praised, though.

High running and maintenance costs were among the biggest disappointment, though, with expensive insurance making things worse. And, while few complained about reliability in as many words, a worrying 24% of owners reported at least one fault within the first year of ownership.

The second-generation Mercedes CLS was never independently crash tested by the specialists at Euro NCAP and it's unlikely the latest model will be, either. However, with a structure that's largely shared with the five-star-rated Mercedes E-Class, the CLS should hold up pretty well in an impact.

It's well equipped to reduce the likelihood of a crash happening, too. All models offer autonomous emergency braking, adaptive brake lights (that increase in intensity to warn following motorists you're braking heavily) and an attention assist system to monitor driver fatigue. Pedestrian impact severity is reduced by an active bonnet, too.

You can add yet more safety with the 'driving assistance plus' package – a bundle that packs active blind-spot assistance, additional active braking measures that take account of traffic crossing ahead of you and active speed-limit assistance, which recognises signs and automatically reduces your speed. A route-based speed adaptation system can do the same if it recognises you're approaching a roundabout or junction.