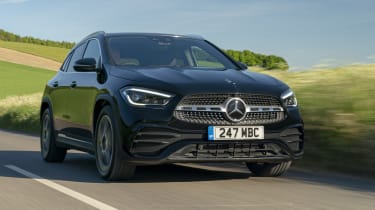 While the original GLA looked a lot like an A-Class on stilts, the second GLA looks much more like a fully formed SUV. Luckily, this taller roofline doesn't translate into a sloppy driving experience because Mercedes has fitted relatively firm suspension. Adjustable dampers work especially well here, as a new design means there's a larger contrast between the firmest Sport and softest Comfort settings than in the old model.

The new GLA feels more accomplished than the old one, with smooth steering, plenty of power and an eight-speed automatic gearbox that works discreetly in the background. It's not as sharp or exciting as the BMW X2 but it's more comfortable, which is likely a more important attribute in this class. It's far more capable than the old GLA, with better body control giving it a surefooted feel even across tricky roads. Its responsive steering adds to its feeling of agility but there's little feedback through the wheel. 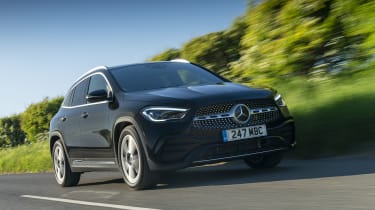 Entry-level versions come with front-wheel drive only, but where equipped, Mercedes' 4MATIC four-wheel drive is more advanced than ever. In normal driving, 80% of power goes to the front wheels, while in Sport mode 30% is sent to the rear axle, and in Off-Road it's set at 50:50.

There's little penalty for choosing the GLA 35 AMG over the A-Class hatchback it's based on, despite the extra height. It still has sharp steering, minimal body lean while tackling corners, and masses of grip. However, while its ability to cover ground at a startling rate isn't in any doubt, drivers who like an involving driving experience are unlikely to find the GLA 35 especially fun. We'd also warn buyers to resist the temptation to fit optional 21-inch alloy wheels, as they create plenty of road noise.

The GLA is offered with a 2.0-litre turbo diesel with two power levels and the option of four-wheel drive, while an eight-speed automatic dual-clutch transmission is standard. Even the entry-level GLA 200d with 148bhp will have plenty of punch for most families, getting from 0-62mph in 8.6 seconds with a top speed of 129mph. Adding four-wheel drive adds some weight, increasing the benchmark sprint time slightly to 8.9 seconds.

With 187bhp and a 0-62mph time of 7.3 seconds, the GLA 220d 4MATIC is a strong performer, with very little lag when you put your foot down. It gives the GLA a surprising amount of pace in everyday driving and there's rarely any need to rev it past 3,000rpm. Below this it's also reasonably hushed for a four-cylinder diesel. 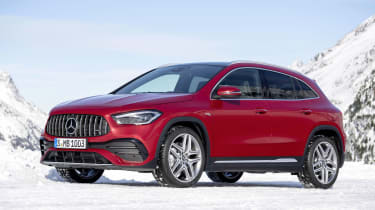 The entry-level GLA 180 is fitted with a 1.3-litre turbo petrol engine serving up 134bhp. Step up to the GLA 200 and with 161bhp, even the same 1.3-litre petrol packs a pretty big punch, and it virtually matches the GLA 200d for performance, getting from 0-62mph in 8.7 seconds. The 2.0-litre GLA 250 is the most potent model in the standard range, with 221bhp shrinking this to 6.9 seconds and giving the GLA a 149mph top speed, but even this is dramatically overshadowed by the AMG versions.

With 302bhp, even the lower-powered GLA 35 is still significantly more potent than the GLA 250, and every AMG version gets four-wheel drive and an eight-speed automatic gearbox as standard. Excellent traction means the 35 springs off the line from 0-62mph in 5.1 seconds as the gearbox fires up through the ratios. It can be a bit more hesitant to kick down, though, and then selects a lower gear than you expected, so manual changes using the paddles tend to be more satisfying. At idle the four-cylinder engine sounds rather rough but a loud exhaust note soon takes over once the GLA 35 is on the move.

The Mercedes GLA is also available as a plug-in hybrid model that uses a 1.3-litre petrol engine in combination with an electric motor. It’s pretty quick, with 0-62mph taking 7.1 seconds, but the power delivery has been designed to be smooth rather than sporty. We’ve reviewed the GLA 250 e plug-in hybrid separately.