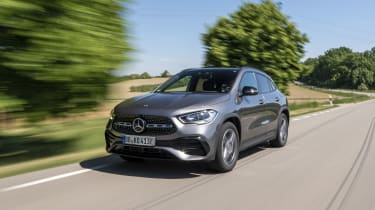 The Mercedes GLA 250 e is the brand’s first attempt at a small plug-in hybrid SUV and one that will rival plug-in versions of the BMW X1, Volvo XC40 and Range Rover Evoque.

Its powertrain is impressive, combining a 1.3-litre petrol engine with a 101bhp electric motor for a total of 215bhp and sprightly acceleration. More importantly, its large 15.6kWh battery also means it can be driven for up to 34 miles without using a drop of fuel, drastically reducing running costs.

According to official figures the GLA 250 e is capable of 176mpg and emits just 38g/km of CO2, making it very appealing for business and private buyers alike. A full charge takes less than two hours using a 7.4kW wallbox, while a 24kW public charger can take the battery pack from 20 to 80% in 25 minutes.

The electric motor is powerful enough on its own to get the front-wheel drive GLA 250 e moving around town, while the intervention of the petrol engine helps it achieve a respectable 0-62mph time of 7.2 seconds. Unlike some sporty SUVs, the plug-in GLA's engineers have clearly had comfort in mind, so power delivery and ride comfort are both smooth but the car does lean a little in corners. 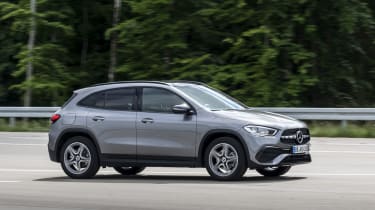 The interior is largely unchanged from the standard GLA, with two screens positioned side-by-side for driver information and infotainment. This gives the dashboard an uncluttered, modern look, and most materials are also of excellent quality. Passenger space has been largely unaffected, but the addition of a large battery does mean the boot has shrunk by 50 litres, so now measures 385 litres in volume. As a rule of thumb, this is about the same as a family hatchback (the Volkswagen Golf has a 380-litre boot), so if this is too small you may need to look elsewhere.

Plug-in hybrids might be becoming more prevalent but they aren't new, and Mercedes has clearly had time to refine the technology. The GLA 250 e has a large battery and great performance, which should be a revelation for drivers with a low to medium daily mileage as it will significantly reduce their running costs.

The GLA 250 e should easily achieve the lowest running costs in the current GLA range. That's thanks to its large 15.6kWh lithium-ion battery, which benefits from being water cooled. Batteries are very sensitive to temperature changes, so keeping them at the right temperature can noticeably increase range. 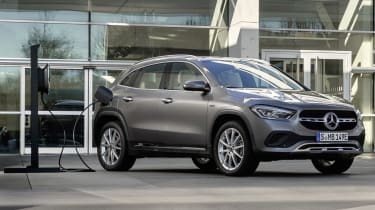 When fully charged, drivers should be able to manage up to 34 miles of all-electric driving, easily taking care of the average daily commute. Thanks to this, its official economy figure is 157-177mpg, but this figure will drop the further you drive using petrol power. CO2 emissions of 38-42g/km will also make the GLA 250 e very desirable for company-car drivers, reducing BiK liability.

Charging the battery from 10 to 80% takes two hours using a 7.4kW home wallbox, while a 24kW public DC fast-charger can take it from zero to 80% in just under half an hour.

Punchy performance but with a focus on comfort rather than agility

The 1.3-litre turbocharged four-cylinder petrol engine and electric motor produce a combined total of 215bhp, while the 101bhp electric motor has enough power to make the GLA 250 e easily capable of keeping up with traffic in EV mode. In fact, it can reach 86mph on electricity alone but higher speeds will drain the battery pack more quickly. The 250 e is front-wheel drive and fitted with an eight-speed dual-clutch automatic gearbox. 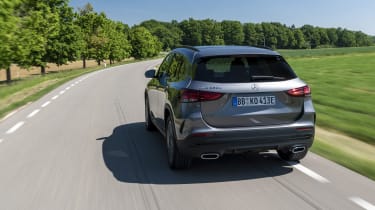 Press the starter button and the GLA drives away silently, with the petrol engine only chiming in when necessary. When it does, the 250 e feels fairly brisk, as evidenced by its official 0-62mph acceleration time of 7.1 seconds and 137mph top speed. However, it's clear Mercedes’ focus was comfort, because while the switch between electric and hybrid power is seamless, the GLA 250 e doesn't feel particularly agile in corners. It was tricky to brake smoothly in our pre-production test car, so hopefully this will be improved for customer vehicles.

Mercedes is blazing a trail as far as interior design is concerned, revolutionising how information is presented to the driver. Analogue gauges are now a thing of the past, with digital screens taking their place for a modern look with greater flexibility. These vary in size from seven-inches to twin 10.25-inch screens in top trim levels, for a truly 'widescreen' effect. The MBUX infotainment software is designed to feel familiar for smartphone users, and offers intelligent voice recognition.

Most of the interior has been adapted from the Mercedes A-Class hatchback but it's more upright here, in keeping with the SUV theme and higher seating position. Materials are of a high quality, there are stylish turbine-style air vents and ambient lighting gives the interior a pleasant atmosphere once it’s dark outside.

Mercedes has reduced the size of the fuel tank and repositioned the exhaust, so despite the small size of the GLA and its large battery, there hasn't been a dramatic reduction in passenger space or boot space.

The latter is the worst hit, with boot space reduced by 50 litres to 385 - just slightly more than you get in a Volkswagen Golf. The boot is a useful shape, however, with no awkward intrusions and a flat floor with no loading lip.

Loaded with the latest safety kit

Mercedes has a long-standing reputation for building cars with cutting-edge safety kit, and there's no sign of that diminishing here. Every GLA comes with plenty of airbags and autonomous emergency braking, along with an active bonnet that lifts slightly in a pedestrian impact to help reduce injuries. The GLA hasn't been crash-tested by Euro NCAP yet, but the smaller A-Class has achieved a five-star rating. 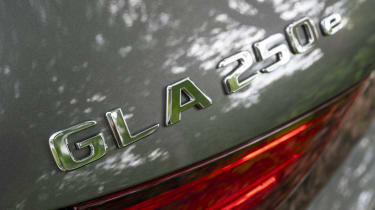 Reliability is slightly more mixed, because while it's encouraging the A-Class (which has a lot of shared parts with the GLA) came 36th in our 2020 Driver Power results, the Mercedes brand was ranked a disappointing 28th out of 30 manufacturers. A fairly low 12.8% of A-Class owners reported one or more faults within the first 12 months.