"The GLA 45 AMG is nearly as quick as the A45 AMG, but boasts a raised ride height and a bigger boot" 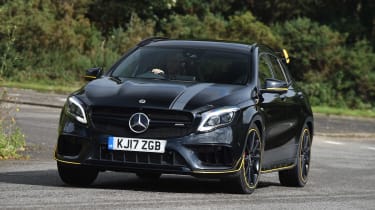 The Mercedes GLA 45 AMG is the performance version of the Mercedes GLA crossover. It shares mechanicals with the Mercedes A-Class A45 AMG, so has Mercedes’ 4MATIC four-wheel-drive system and a 376bhp engine. Rivals include the Audi RS Q3 and the Porsche Macan, or slightly larger models like the Jaguar F-Pace and Alfa Romeo Stelvio.

That 376bhp engine makes the GLA 45 by far the fastest model in the range, but it still gets the raised ride height and practical interior of the normal car. In autumn 2017, the GLA 45 was given a mild refresh, with subtle changes like vertical louvres for the front air intakes, a revised rear spoiler and a new rear bumper diffuser. These aren’t just for looks, cooling has been improved and there’s now less aerodynamic drag too.

There’s also a new Yellow Night Edition, which is likely to polarise opinion with its yellow decals and embellished alloy wheel rims, although they at least make sure it stands out. The AMG sports seats and Alcantara sports steering wheel are much more welcome add-ons. However, with a price-tag of over £50,000, it’s hard to forget this car is based on a Mercedes A-Class, regardless of how fast it is.

Push the GLA 45 hard in the corners and it is marginally slower than the A45, but its softer suspension does a better job of smoothing out bumps in the road. Add to that a boot that is much bigger than the A45’s and the GLA 45 is a much better bet for someone looking for a pacy family car. 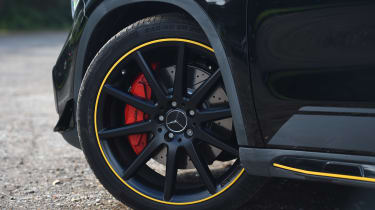 As a top-of-the-range model, the GLA 45 comes with a healthy list of equipment that includes huge 19-inch alloy wheels, climate control, a seven-inch display and sat nav. The recent facelift has left the engine's power unchanged (it got a boost from 355bhp in 2015) but LED headlights are now standard along with the aforementioned tweaks.

The GLA 45 also offers reassuring safety, thanks to a five-star crash-test rating from Euro NCAP. A 96% score for adult occupant protection points to how strong it is. While the Mercedes GLA itself wasn’t featured in our 2017 Driver Power owner satisfaction survey, the A-Class it’s based on came 69th out of the 75 cars included.

With 376bhp on offer you would think that the GLA 45 AMG would costs a fortune to run, but 38.2mpg really isn’t that bad for a fast four-wheel-drive model. After the first year's CO2-based road tax (generally included in the on-the-road price), all GLA 45s cost £140 a year to tax, though due to its list price being more than £40,000, it's liable for an additional surcharge of £310 a year in years two to six, bringing the annual bill to £450 during that period. 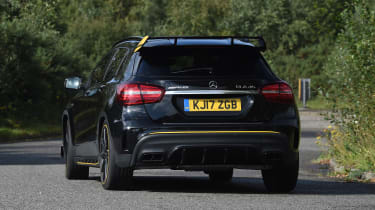 Fuel and road tax are not the only factors that you have to consider and the GLA 45 will cost significantly more to insure than a basic model. It sits in group 42 compared to group 21 for the 2.1-litre diesel GLA.

Mercedes offers fixed-price-service plans that cost from around £30 a month and mean you can spread the cost of your car’s maintenance.

Despite extra weight, GLA 45 is nearly as quick as an A45 AMG

That extra weight and raised suspension means that the GLA can’t quite match the quick responses of the A45, but the difference is marginal. The GLA uses Mercedes' 4MATIC four-wheel-drive system, so it has excellent grip in (and powering out of) corners. It also has electric power steering, which is often blamed for lacking feel, but in the Mercedes it's accurate and responsive. 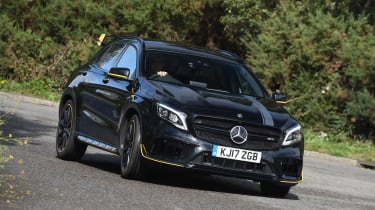 Another carryover from the A45 is the seven-speed automatic gearbox. It is quick to change, but can be a little jerky in its urgency. For the 2017 facelift, the top five gear ratios were made even shorter, increasing the ferocity of its acceleration even further.

The engine note is deliberately loud, and fitting the optional sports exhaust system for £500 just serves to accentuate the noise. It also gives you a button to increase the exhaust sound in the car when you feel like it. Reassuringly, Mercedes has seen fit to adorn the GLA 45 with powerful ventilated disc brakes that make short work of stopping the car from speed.

While it’s undeniably fast, this crossover never feels particularly settled when you just want to cruise around – unlike the Audi RS Q3 or Porsche Macan. The responsive throttle and aggressive gearbox can become wearing on a long journey.

The GLA 45 is more comfortable than the A45 AMG

Open the driver’s door to the Mercedes GLA 45 AMG and the most obvious change over the standard model is the car’s body-hugging sports seats. Get in and the dashboard shares the design of the normal GLA models, with three circular ventilation ducts in the centre of the dashboard and a seven-inch tablet display for the car’s infotainment system. The recent facelift has brought a new synthetic leather dashboard and redesigned dials, though like the exterior changes, the improvements are subtle. 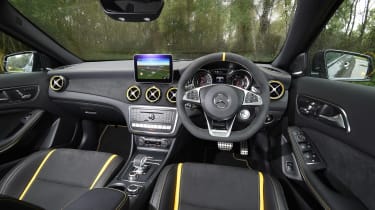 The GLA 45 has plenty of carbon-fibre look trim, red highlights and a racy flat-bottomed steering wheel, while the interior is trimmed in leather. Getting comfortable at the wheel is easy and the Mercedes offers adjustment for the driver’s seat and steering wheel.

The GLA’s crossover body style gives the driver a better view of the road ahead, but isn’t as high as the Audi RS Q3. The raised suspension of the GLA 45 also means it offers a more comfortable ride than the A45 AMG, but it’s stiffer than the standard GLA and there’s considerable road noise at higher speeds. The GLA 45 comes fitted as standard with the seven-speed automatic gearbox from the A45, which means you don’t have to constantly operate the clutch in stop-start traffic.

GLA 45 AMG is more practical than the A45 AMG

If you’re weighing up whether to buy an A45 AMG or a GLA 45 AMG, then the latter’s bigger boot might just swing it. The GLA can lug up to 480 litres of luggage with the rear seats up, which compares well to the A-Class’ 340-litre boot. Fold down the GLA’s back seats and the load bay grows to 1,235 litres – just under 100 litres more than the A-Class’ maximum capacity.

The Porsche Macan boasts a 500-litre boot, with up to 1,500 litres when the rear seats are folded flat. The slightly larger Alfa Romeo Stelvio can fit 525 litres behind the back seats. 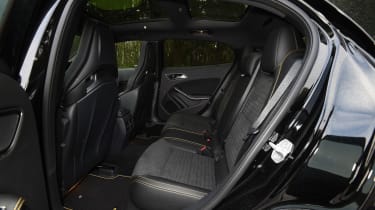 You might think the GLA’s more upright body shape would mean more passenger space in the back compared to the A-Class, but in reality the two are closely matched. The GLA offers enough head and legroom for tall adults, but also suffers from sloping rear windows that – as in the A-Class – makes the car feel more claustrophobic than it actually is. 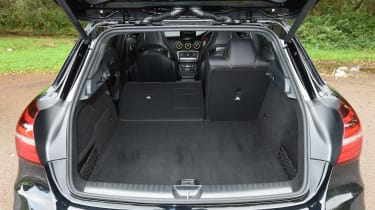 Getting comfortable in the front is easy with loads of head and legroom and there are numerous cubbyholes in the centre console, plus cupholders, and large door pockets.

The Mercedes GLA scored the full five stars in its Euro NCAP safety assessments, with an excellent 96% adult occupant score and an 88% child occupant score. The structurally similar AMG 45 may have significantly more power than the standard GLA, but this is backed up by beefier brakes, which stop the car with reassuring efficacy.

All models come fitted with an array of airbags, stability control, anti lock brakes and ISOFIX child-seat mounts. The Mercedes also comes with Attention Assist, which stops the driver falling asleep at the wheel, and Collision Prevention Assist. This warns the driver of an imminent collision and prepares the brakes for an emergency stop. 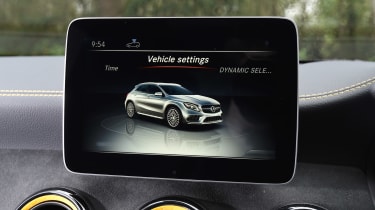 Mercedes came 21st out of 27 manufacturers in our 2017 Driver Power customer satisfaction survey. This is likely to be a worry for anyone considering a Mercedes, particularly given their price premium and the fact rival brands BMW and Jaguar came ninth and 12th respectively. On a more positive note, Mercedes was ranked 16th in the reliability category.

You’ll pay a £5,000 premium for the GLA 45 over the A45, but that could well make sense if you want the car’s raised ride height and bigger boot. The GLA 45 comes with all the basic equipment you could need, including 19-inch alloy wheels, climate control, LED headlights, an eight-inch display and sat nav.

But if that’s not enough Mercedes offers a range of options. You can make your GLA look meaner by opting for the AMG Aero pack (£1,500), which adds a roof spoiler and ground-hugging front bumper, while the AMG Night Pack includes huge 20-inch alloy wheels and shiny black roof rails. If you feel the car’s interior needs jazzing up, you could go for the Carbon Fibre Pack, which adds carbon-fibre trim to the interior. 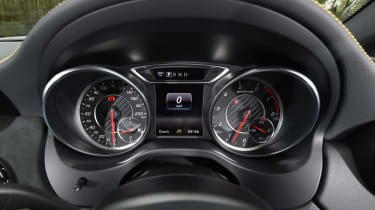 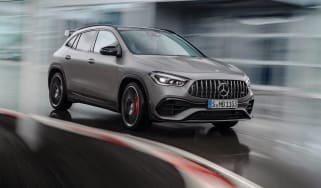 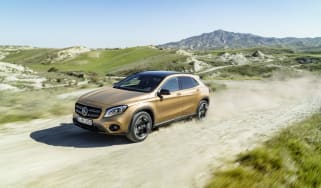