The Mercedes GLC provides loads of storage areas and its boot is a decent size, if not class-leading

Considering it’s an SUV, the GLC is easy enough to get into, as its doors open nice and wide. The steering wheel and driver’s seat have plenty of adjustment and there’s plenty of room in the back. Boot space is good, if not class-leading, but the plug-in hybrid offers noticeably less due to its batteries taking up some of the luggage room. 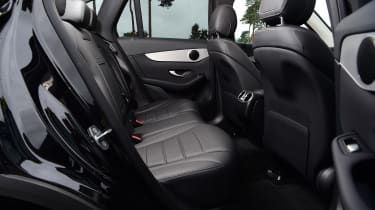 The GLC offers a decent amount of leg and headroom in the rear, but the transmission tunnel can eat into space for the middle-seat passenger.

Interior storage is good, thanks to a generous space in the front armrest and a deep cubby in front of the infotainment dial in the centre console. The door bins can all hold bottles and rear-seat occupants get their own air ventilation and an armrest that features a storage cubby and two cup-holders.

Total boot volume is about on par with a lot of the GLC’s rivals. The 550 litres on offer is the same as what you get in the BMW X3 and equal to the Audi Q5’s boot. However, it’s less than what’s available when you fold down the Land Rover Discovery Sport’s third row of seats. The GLC’s rear seats fold in a 40:20:40 configuration with the pull of a lever, offering extra versatility and more room in the boot if needed. 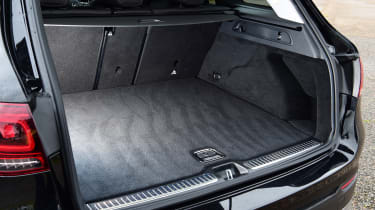 In the boot you’ll find the usual range of neat practical touches like anchor points for smaller items and a cubby either side to store bits and bobs. The boot itself is square and the opening is large, so getting awkwardly shaped items in should be a breeze, especially with the power-operated tailgate.

Compared to the 550 litres you get in petrol and diesel cars, the PHEV’s boot is a bit smaller at 395 litres. That’s only 25 litres more than in the A-Class hatchback but at least the boot floor is flat, unlike the annoying step in the boot of the E-Class plug-in.

All diesel GLC models can tow 2,500kg – more than most versions of the Land Rover Discovery Sport, and matching the D240.