Lively MINI Clubman Cooper S is guaranteed to put a smile on your face, but more sensible Cooper is a good performer, too

Since its revival by BMW in 2001, the 'new MINI' has put driving fun at the centre of its brand appeal. More family-orientated models such as the MINI Countryman and this MINI Clubman attempted to retain that, with nippier handling and more eager engines than their competitors. The latest Clubman diverges from this slightly with softer suspension, designed to offer a more comfortable ride than its predecessor. It's only partly successful in this respect, however, with the emphasis still seeming to be on sharp and direct handling and agile responses on twisty roads.

The Clubman JCW was given a major upgrade in 2019, making it a blast to drive, and even putting the Volkswagen Golf R Estate in the shade for raucous thrills. It might not have the ultimate polish (or boot space) of the VW, but the JCW's firm suspension, soundtrack and playful handling certainly raise a smile.

The Clubman range kicks off with the 1.5-litre three-cylinder engine with 134bhp in the Cooper Clubman, where it emits a pleasing noise and feels sporty, accelerating from 0-62mph in 9.2 seconds. A top speed of 127mph means it’ll feel unstressed cruising at the 70mph UK motorway speed limit. 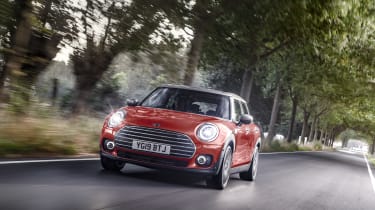 Enthusiastic drivers are likely to gravitate towards the punchier Cooper S, which makes a hefty 189bhp and gets from 0-62mph in just 7.3 seconds (or a tenth quicker with the optional eight-speed automatic gearbox). Top speed here is 142mph and it’s very enjoyable to drive – assuming you stick with the manual gearbox.

The even faster and more powerful John Cooper Works version gets from 0-62mph in 4.9 seconds, making the latest version much faster than the previous one, which took 6.3 seconds. With an advanced 2.0-litre turbo petrol engine, it has 302bhp, making it the most powerful MINI ever sold. It makes a great noise, and an advanced four-wheel-drive system ensures traction out of slow corners is unshakeable. An eight-speed automatic adds to the excitement, with a kick in the back in Sport mode when new gears engage under hard acceleration.

MINI previously offered the Clubman with 1.5-litre and 2.0-litre diesel engines, but these are no longer available. The 2.0-litre Cooper D model offered a solid 148bhp power output and the strong in-gear acceleration typical of diesels – in fact, it could actually feel quicker in real-world driving than the Cooper S. It takes 8.9 seconds to go from 0-62mph and will keep going until 132mph.