Although the revived MINI brand has built its reputation primarily on driving enjoyment, it’s also become known more recently for offering efficient engines developed by parent company BMW. In the new Clubman, the Cooper model fills this brief, thanks to a three-cylinder petrol engine that should prove reasonably cheap to run.

The 134bhp Cooper petrol manages up to 43.5mpg and it's the most affordable option for company-car drivers thanks to its reasonably low CO2 emissions of 143-159g/km. 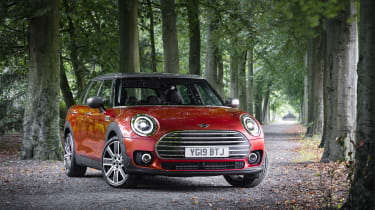 But you don’t have to blow the running-costs budget entirely if you want more power. The 2.0-litre Cooper S has a 189bhp petrol engine and lively performance, but can still manage around 40mpg.

As you might expect, the fastest version of the Clubman, the JCW model, is also the least economical. It has official economy figures of up to 35.8mpg while also being the most expensive proposition for company-car drivers due to CO2 emissions of around 180g/km.

Insurance ratings for the MINI Clubman kick off in group 20 for the Cooper. This increases to group 26 for the Cooper S and 40 for the John Cooper Works. In comparison, the entry-level Audi A3 Sportback is in group 16, rising to group 30 for a high-spec 2.0-litre diesel version.

The Clubman comes with the standard MINI manufacturer's warranty that lasts for three years, which seems a little miserly when other brands such as Toyota and Hyundai offer five years and Kia offers a seven-year warranty. You can however, extend this further at extra cost, covering either the main engine and gearbox parts, or a more comprehensive policy that covers almost everything.