The latest Clubman is powered by advanced turbocharged petrol engines developed by MINI’s parent company BMW. It shares those engines and many other mechanical parts with its three and five-door hatchback sister models – as well as the BMW 2 Series Active Tourer and Gran Tourer MPVs. As it’s a fairly new model, it boasts much of the latest safety and crash-prevention technology – although some of it is optional. 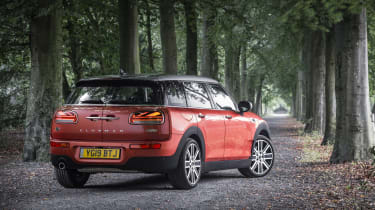 The revised Clubman didn't appear in our annual Driver Power owner satisfaction survey but MINI as a brand finished in 26th place out of 30 manufacturers. Of the MINI owners that responded, 8% told us they’d experienced at least one fault with their car in the first year.

Independent safety experts at Euro NCAP only gave the Clubman four out of a possible five stars for safety in its latest and most stringent safety tests, and this less-than-perfect rating means it lags behind some rivals that were awarded five out of five. It lost marks for pedestrian and child occupant protection, as well as active safety, scoring 68, 68 and 67% respectively in these categories. Specifically, the testers criticised the Clubman’s lack of a lane-keeping assistance system.