The most fuel-efficient MINI Convertible is the 1.5-litre Cooper. MINI claims it can achieve up to 52.3mpg, with CO2 emissions of 122g/km. Company-car users will be liable for a 25% Benefit-in-Kind (BiK) tax rate. The automatic gearbox drops economy to 49.6mpg and raises CO2 emissions to 130 g/km, for a 27% BiK rating. 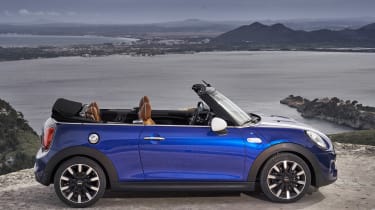 The more powerful 2.0-litre petrol engine in the MINI Cooper S claims fuel economy of 40.9mpg with CO2 emissions of 157g/km, putting it in the 32% BiK band. The automatic model is considerably more fuel efficient, with figures of 48.7mpg and 132g/km for 27% BiK.

The above are all 'NEDC-equivalent' economy and emissions figures, with results obtained under the latest WLTP testing procedure converted to reflect what would have been achieved under the old NEDC system. MINI presents its figures in this way to enable comparison with rivals, while company-car tax continues to be calculated using NEDC-equivalent numbers.

All MINI convertibles are liable for road tax of £140 a year.

The 1.5-litre Cooper is likely to be the cheapest MINI Convertible to insure, occupying insurance group 19. The Cooper S jumps up quite a bit to group 29

The standard MINI warranty isn’t the longest, lasting just three years, but it does as least cover you for unlimited mileage during that period.