The Mitsubishi Eclipse Cross handles well and has a decent petrol engine, but its CVT gearbox is a letdown

Buyers of stylish compact SUVs might have other priorities than how well their cars handle, but a really good all-rounder will be just as enjoyable to drive as it is to look at. First impressions from behind the wheel of the Mitsubishi Eclipse Cross are that it’s more than capable of putting a smile on its driver’s face.

The sporty looks of the Eclipse Cross give it the air of a car at home when the road gets twisty, and it proves more than capable of dealing with fast cornering. Despite sharing a mechanical platform with the Outlander, it's less prone to leaning in corners, although its steering is similarly lacking in feel. However, while a little light and spongy, it is at least precise, so it’s easy to place the Eclipse on the road. 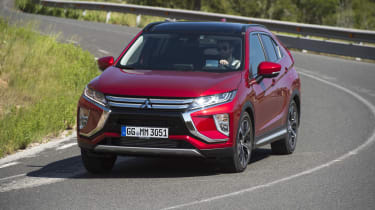 With four-wheel drive fitted it feels secure in the tightest of bends – and would doubtless inspire confidence on greasy roads or loose surfaces, too. It incorporates a system called Super-All Wheel Control, which handles the power and braking for all four wheels. Sensors are used to determine how much power to send to the front or rear and up to 60% can be sent rearwards if you engage ‘snow mode’.

Four-wheel drive petrol Eclipse Crosses are fitted with a Continuously Variable Transmission (CVT) automatic gearbox, and it's not quite as slow-witted as other of this type can be. Around town, where driving conditions are predictable, the CVT acquits itself well. But if you ask the Eclipse Cross to deliver more power, the engine revs soar noisily, without much feeling of acceleration.

The eight-speed manual ‘sports mode’ disappoints, though. It's designed to simulate the feel of a gearbox with fixed gear ratios and there are some beautifully finished metal gearshift paddles on the steering column you can make manual changes with. But flicking one is met by reluctance and hesitation and doesn’t give much in the way of immediate manual control at all.

You may as well leave it the car in automatic mode and suffer gearchanges that never feel like they happen at the right engine speed. It’s a real shame, because the 1.5-litre engine feels much better when fitted with a manual gearbox.

Overall, it’s possible to have fun in the Eclipse Cross, but the same is true of most other cars and some rivals are better able to entertain. The SEAT Ateca remains unrivalled as a compact SUV that really comes alive when you’re in the mood for a bit of spirited driving. 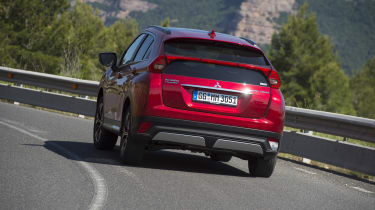 A newly developed 1.5-litre turbocharged four-cylinder petrol is the sole engine offering for the first Eclipse Crosses to reach UK buyers. Developing 161bhp, it’s a game, willing engine with a decent supply of pulling power. It’s not the most economical, but it’s quiet and smooth at relaxed speeds and seems enthusiastic when you’re in the mood to put your foot down – although it’s a tad noisy at high revs.

It’s available with front-wheel drive and a six-speed manual gearbox, or four-wheel drive with a CVT automatic. Unfortunately, our experience of this gearbox – described above – is not entirely positive. Things improve markedly with the manual, as you can keep the engine in its sweet spot between 1,800 and 3,000rpm, making quick and smooth progress without the engine becoming thrashy. Even at a motorway cruise, it sits at around 2,100rpm in sixth.

A 2.2-litre four-cylinder turbocharged diesel will join the Mitsubishi Eclipse Cross range in due course, and will come exclusively with an eight-speed automatic gearbox – of the conventional type rather than CVT.