Buyers of even the most fashionable cars in this category tend to have one eye on running costs and it seems the Eclipse Cross goes into battle with one hand tied behind its back in this respect. The sole petrol engine available at launch can’t match the fuel economy of rivals, so we’ll have to wait for the broader engine line-up to arrive before the Eclipse can compete on a level playing field.

Initial cars for the UK are fitted with an all-new 1.5-litre turbocharged petrol engine with 161bhp. While that’s quite a lot of power, the Eclipse Cross is quite a lot of car, so this engine has to work quite hard to propel it. As a result, fuel consumption is an unremarkable 40.4mpg with the CVT automatic fitted. CO2 emissions are on the high side, too – 159g/km means a Benefit-in-Kind (BiK) rate for of 30% for company-car drivers. With front-wheel drive and a manual, things are slightly better, but figures of 42.8mpg and 151g/km (for a 29% BiK band) are still high. 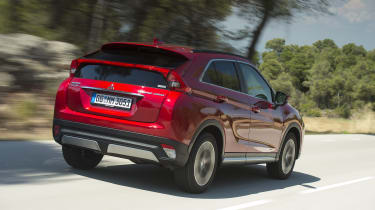 A 2.2-litre diesel engine is scheduled to join the range towards the end of 2018 and will be offered with a regular eight-speed automatic gearbox in place of the CVT used by the petrol engine. There’s no word yet on the fuel consumption or CO2 emissions figures for this engine, though.

Further improvements in economy and emissions are likely when a planned electrified Eclipse Cross touches down – although reports are that it’ll be a conventional hybrid and not a plug-in like the Mitsubishi Outlander PHEV.

Every Mitsubishi Eclipse Cross available costs £140 a year to tax. If and when the aforementioned hybrid arrives, that’ll be taxed at £130 a year.

Insurance ratings for the Mitsubishi Eclipse Cross are fairly simple, with just one engine available. Depending on trim level, it sits in groups 18-20 out of 50. The Nissan Qashqai 1.6-litre petrol occupies insurance group 16 – a slightly lower rating than smaller-engined Qashqais, because of the extra crash-avoidance technology fitted as standard.

Every Mitsubishi requires servicing annually or at 15,000 miles, whichever occurs first. A service plan can be set up to cover the first three services in your Mitsubishi’s life, costs vary depending on the model. Mitsubishi has yet to release Mitsubishi Eclipse Cross service plan costs.