On a twisty road, it’s clear that the Eclipse Cross’ suspension is adept at keeping this fairly bulky SUV on an even keel, but when the roads straighten up, you realise that its twisty-road prowess comes at the cost of some motorway smoothness.

The springing feels rather on the hard side and while the SEAT Ateca is even firmer, the Mitsubishi is roughly on a par with the Ateca and Peugeot 3008 for ride comfort. The Eclipse Cross particularly punishes on rough urban roads at low speeds, where potholes and drain covers can tend to crash through the car, jarring occupants harshly. The engine is quite refined at lower revs, but tyre noise and wind rustle from the large door mirrors are less impressive at high speeds. 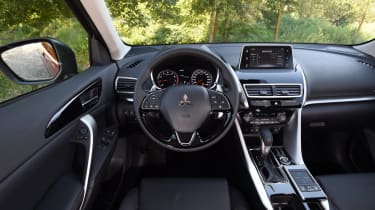 It’s immediately evident that the Mitsubishi Eclipse Cross marks a big step forwards in quality and design compared to recent models from the marque. The ASX lags a long way behind for material feel, while the Outlander is comprehensively embarrassed by the Eclipse’s far more imaginative design. However, European rivals like the Peugeot 3008 still have rather more flair.

It’s said that imitation is the sincerest form of flattery, and no doubt Lexus will find a big compliment in the Eclipse Cross interior’s resemblance to many of its products. But taking lessons from Japan’s best has paid dividends, with a quality feel to the plentiful soft-touch plastics. It all looks up-to-date, too, with a high-mounted seven-inch touchscreen infotainment system. There’s also a gesture-sensing touchpad between the front seats, from where you can control it without leaning forwards.

It works well, with an intuitive interface that uses crisp, modern graphics. The touchscreen is responsive, too, but the latest European systems – such as those found in the SEAT Ateca and Peugeot 3008 – still have the edge for style and usability. It’s a far better system than that offered by Nissan for its Qashqai, though. 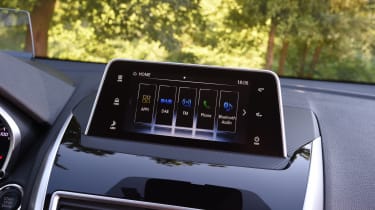 The Eclipse Cross is available with lots of clever on-board technology. This includes a colour head-up display, which can show speed, active cruise control and navigation direction arrows, depending on the level of equipment fitted. Dual-zone climate-control air-conditioning is also fitted. The Black Connected Edition gets on-board Mitsubishi Connect telematics.

Trim levels are simply called 2, 3 and 4 and although every Eclipse Cross features a seven-inch infotainment touchscreen, it’s little disappointing that sat nav isn’t offered. However, standard Apple CarPlay and Android Auto mean you can link your phone to use its navigation software – although this could prove costly depending on your data allowance, and it’s worth remembering you won’t always get a signal in rural locations.

The screen supports various other features, including ‘around vehicle monitor’, which can provide a bird’s-eye view of the car to help with parking, with images provided by four cameras to produce an overall composite picture. This operates in conjunction with conventional parking sensors. An auto-dimming rear view mirror with trim levels 3 and 4 was added at the start of 2019.

Safety equipment includes lane-departure warning and autonomous emergency braking. Active Yaw Brake Control is now available on two-wheel drive models - this varies the braking force to the front wheels to help the car grip in corners. Also on the Eclipse Cross is active cruise control, with which you can also set a maximum speed – helpful when you encounter roadworks with a contraflow system in operation.