Modern SUV owners will feel at home behind the wheel of the Mitsubishi L200. Its engines are reasonably smooth around town, but they do start to become slightly gruff and noisy at speed, so don't think of it as a motorway car. Handling is pretty secure and impressive for a vehicle in this class, but the L200 still won't please keen drivers due to its soft suspension and high ride height – being as big as it is, the L200 does tend to roll and bump around a bit, but at the same time it isn’t uncomfortable. 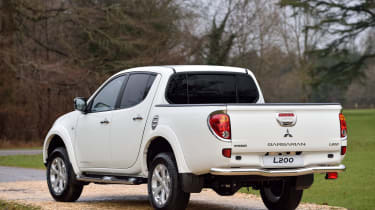 The four-wheel-drive system can be switched off to run in two-wheel-drive mode, saving fuel when you don't need the extra grip provided by all four wheels working at once. There's also an optional low-range mode on the gearbox. This engages lower gears to help with serious off-roading or if you're trying to scale a particularly steep hill with a heavy load.

You're limited to diesel engines only with the Mitsubishi L200, which isn't surprising, because petrols wouldn't be as economical or have as much mid-range pulling power in such a big, heavy vehicle.

There's only one 2.5-litre diesel engine, too, but it's available with two different power outputs – 134 or 175bhp. Again, the L200's size and weight means it could never be considered a fast car and the less powerful version will cover 0-62mph in either 15 or 15.2 seconds depending on the exact spec, but it's worth remembering that it's also the most economical in the range.

The more powerful 178bhp version is a little quicker, but not by a huge amount. When fitted with an automatic transmission, it'll take 13 seconds to do 0-62mph. The 178bhp manual is the fastest of the lot, taking 12.1 seconds, which is reasonable when you consider the Mitsubishi's size and what it's likely to be used for.