"The Mitsubishi L200 pickup accounts for a third of the company's total sales in the UK."

The Mitsubishi L200 is arguably the most striking-looking pickup on the market thanks to styling inspired by the brand's desert rally cars. It's aimed at tempting existing SUV owners towards something more practical, while retaining loyal fans that admire its rugged credentials.

It goes up against a small yet established band of pickups, including the Nissan Navara and Isuzu D-Max (which are similarly utilitarian and also built by Japanese manufacturers) as well as European and American competitors such as the Volkswagen Amarok and Ford Ranger – both of which have more car-like cabins.

There are three different body styles: four-door Double Cab, two-door Club Cab and two-door Single Cab. The Double Cab is the most comfortable and the best choice for those who are used to driving cars rather than pickups. The flatbed load area is extremely useful for carrying large, bulky items and Mitsubishi also offers a series of hard-tops and tonneau covers (fixed extra pieces of bodywork that cover the load area), which are useful if you want to keep your cargo dry and hidden from view. 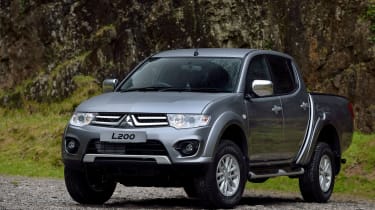 The L200 is fitted with a turbocharged 2.5-litre diesel engine with either 134 or 175bhp. Cabin quality is much improved over previous models and comfort is on par with similarly priced pickups. The L200's off-road ability is impressive, but it's not so good on tarmac, where it struggles to hide its commercial-vehicle underpinnings.

The driving position is high, which provides a great view of the road, but the L200's size is the biggest problem: parking can be tricky without the optional rear-view camera. Entry-level 4Life and 4Work models are poorly equipped, but they're quite cheap to buy and very much aimed at commercial users.

All models can return between 32 and 38mpg, which makes the L200 as efficient as its main rival, the Nissan Navara. However, these two models look rather dated when compared to the more modern Volkswagen Amarok and Ford Ranger. 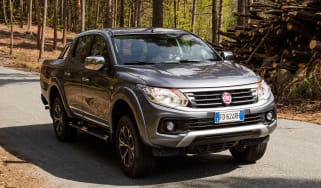