A big, heavy pickup such as the Mitsubishi L200 is never going to compete with family hatchbacks on the running costs front. Its size and the power required to shift it mean you're looking at mid-30s mpg – but that's to be expected from a pickup and none of the L200's rivals does much better.

It’s worth noting that the Mitsubishi is classed as a commercial vehicle. Its four-wheel drive, flat bed and tough all-round ability make it ideal for working on building sites or farms, but this also means VAT-registered businesses can buy it for preferential rates – essentially, they don't have to pay VAT, so the list price is lower.

There's just one engine available with the Mitsubishi L200 – a 2.5-litre diesel producing either 134 or 175bhp. There's little to choose between the two versions in terms of fuel economy and CO2 emissions, but the figures do fluctuate slightly depending on the size of the body – smaller Single Cab models are lighter and consequently a little cheaper to run, while the larger Double Cab long-wheelbase models are a bit heavier and thirstier. The automatic gearbox saps fuel economy a bit as well. 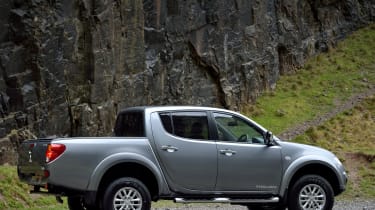 The worst fuel-economy figure you can expect is 32.1mpg from 175bhp Double Cab model with an automatic gearbox, which also emits 233g/km of CO2. That means road tax will come to £490 a year for private buyers.

The most efficient model is the 134bhp Single Cab with a manual gearbox, which returns 37.7mpg and has CO2 emissions of 199g/km for private road tax of £265 a year. There's some variation between these two extremes, but not much – most versions of the L200 emit around 200g/km of CO2 and return roughly 35mpg.

Insurance groups are often relatively low for commercial vehicles and that's certainly the case for the L200. Every model falls into either group nine or 10 and it tends to be the bigger models with the more powerful diesel engine and more equipment that are in the higher of the two groups.

Mitsubishi is pretty confident of the L200's rugged reputation, so much so that it comes with a five-year/125,000-mile warranty. That's the longest of any pickup in the UK.

L200s should be serviced every 9,000 miles or 12 months according to Mitsubishi. That seems like quite a short interval, but it makes sense when you consider the tough life that such pickups are likely to lead.